Anatomy of a TD: Robert Ayers and Duke Ihenacho in Coverage

Going back and mapping my Defensive Tackle techniques, this play grabbed my attention so let us look at the Luck TD pass to the fullback in the right flat.

Share All sharing options for: Anatomy of a TD: Robert Ayers and Duke Ihenacho in Coverage

22 personnel, wing left, Reggie Wayne split wide right.  Havili is on the outside but Luck motions him over to the right side

Their "under" defense with Von Miller and Robert Ayers as the ends.  This is a bit of an anomaly as Ayers is also standing up, which he almost never does--even from this alignment.  By design, it is to protect against a pass in the flat which will happen.

You'll end up with a flats concept to both sides along with a slant and out.  The matchups are identified below. 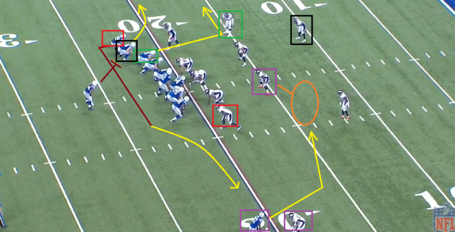 Now, Ayers isn't fooled, he takes his drop in the flat but is still slower than the quick Havili.  He's beat and it is a mismatch from the start.  What could keep this play from going the distance is the recognition of Duke Ihenacho who is the last line of defense. 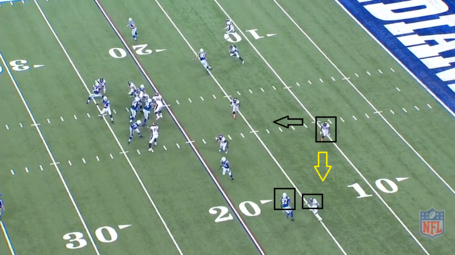 Now, he should know the coverage underneath and that the linebacker will drop into a zone into the area of the slant.  It effectively brackets Reggie Wayne with Champ Bailey on the outside.  Duke should know that Havili against Ayers is a mismatch and he should be prepared to snuff it out.  Instead he bites on the slant, realizes his mistake and is too slow to be of any help on Havili. 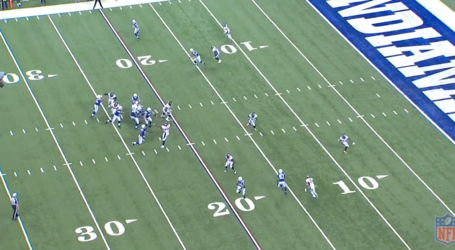 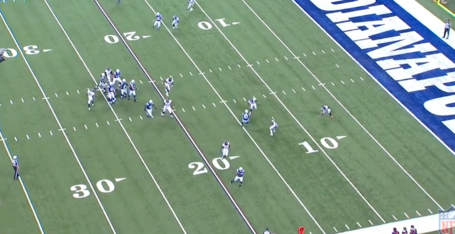 Here he figures it out but is too late.

Chalk this up to good design by the offense.  They knew coming in if they were to be in this situation, they would likely have one on ones in the flat against a rush OLB or DE.  This is one area that Duke needs to get better at: understanding the coverages around him.  If he does he can put himself in position to help Ayers from the start.

As far as Ayers, he hesitates a bit at the snap, but I'm not sure what else he could do to win here.  Just a bad situation to be in for him.