Share All sharing options for: Replaying The Broncos Run Game Against Colts

So there has been a lot of talk about the run game after two poor performances so I decided it was worth investigating. I'll keep it simple, after rewatching each run 4-5 times, it was clear the offensive line was out coached and made consistent mistakes. To help look at this, I went and clipped each run for Moreno that went for less than 3 yards since that is the expected distance a back should be able to get with decent blocking in front of him. While I can't use each one due to space concerns, I think the examples I use should be pretty clear but when I'm drawing on the play, blue lines are for the offense and symbolize the direction they are running or blocking while red lines indicate the defensive players movement.

For each play we'll start by looking at the down and distance, the personnel group and the result of the play. Then we will be breaking the play into 4 parts, the pre-play, mid-play, hit and the result. By doing this we are able to look at the plan of the play and how it progressed.

Pre-Play: The play call was for Moreno to run between Kuper and Vasquez. Peyton can clearly see the safety (41) and both linebackers (51 and 50) are all preparing to attack the line of scrimmage and not drop into coverage, That means it's a 7 on 7 game and entirely up to blocking. The problem, and an obvious one, is that they are running into 4 defenders with only 3 blockers (Vasquez, Kuper, Ramirez), Peyton should have realized this. 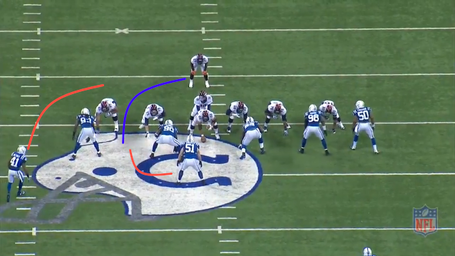 Mid-Play: The run is designed to go behind the undermanned side opposite the tight end help. Right away Vasquez misses his assignment by blocking inside and assisting Kuper closing the intended hole. This leaves the defensive back (41) free into the backfield. Moreno moves away from the intended hole between the guard and tackle and looks inside only to find his hole is blocked by a linebacker (51). Julius has already released his defender before Moreno even has the ball. 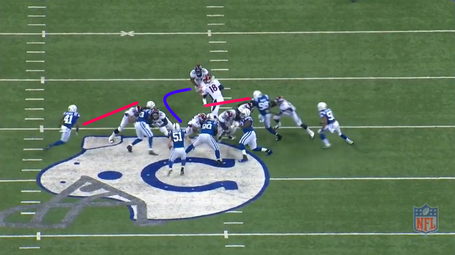 Hit: There isn't a good picture but Moreno is pincered on both sides and while he tries to take it upfield he's hit by the linebacker (51) and then is caught from behind by the defensive back (41) and defensive end (98).

Result: Vasquez and Julius Thomas both blow their blocking assignments and because of that and outside run to the right is blown and Moreno is forced to go inside to be met immediately by a linebacker. This is just blown blocking (Julius) or missing your assignment (Vasquez).

Pre-play: This time they decide to run behind the tight end side by going inside between the guard and center. Once again you have two linebackers who are preparing to play the line of scrimmage (50 and 51). If all the blocking goes well, you have Julius at least chip the linebacker (50) and then move to block the defensive end and each lineman pick up the defensive lineman, you'll have Ramirez able to get into the 2nd level and pick up the linebacker (51) which would lead to a 4-5 yard run depending on the closing speed of the defensive back (41). 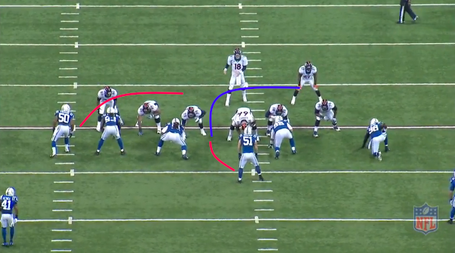 Mid-play: Again there is a blown block by Julius Thomas and instead of blocking the blitzing linebacker (50) he chips the defensive end who was already engaged with Kuper who pulled as part of the designed play so Ramirez and Vaquez could get to the linebackers. Another factor was the Demaryius Thomas doesn't lock up his defensive back who is now in full run towards Moreno. Now this would be fine since it's an inside run, the issue is that there is no hole up front, just a tangled mess of players, he can't cut it outside like he'd normally do because of the incoming defenders, so he pushes forward. 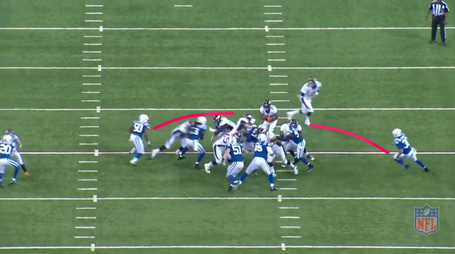 Hit: Moreno finds enough room for one yard but is wrapped up by 3 Colts before getting to the first down and gets tripped by Ramirez, who had fallen down, before he can get his feet churning. Between being tripped by his own lineman and the 3 defenders latched onto him, there was no room to run. Also what is Vasquez doing, he totally missed blocking two players (51 and 95). 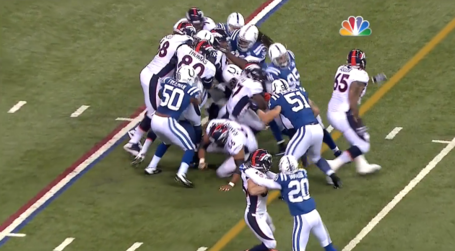 Result: Moreno gains about half a yard but is unable to get the 1st down because of blown blocks by Julius and Demaryius Thomas and then by a lack of inside push, Moreno was hit at the line of scrimmage and then tripped about half a yard later while being tackled.

Pre-play: This is the first play we look at that is well designed, Peyton calls the run when he sees he's only facing a 4 man blitz with the linebackers dropping into coverage. Moreno's run is designed to run between the guard and center with the center getting upfield to pick up the linebacker while Beadles and Clark handle the defensive tackle and end. 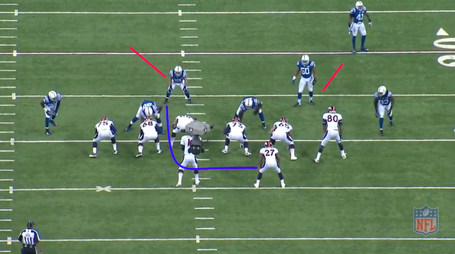 Mid-play: The play appears to be going well, Moreno has to make a slight cutback because Clark is struggling with his defender. Ramirez moves up field and picks up the linebacker while Kuper has a block lined up on another linebacker (50). Unfortunatly if you look at Clark (75) you can see he's lost control of his block on the defensive end, forcing Beadles to handle both his defensive tackle and Clark's defensive end. 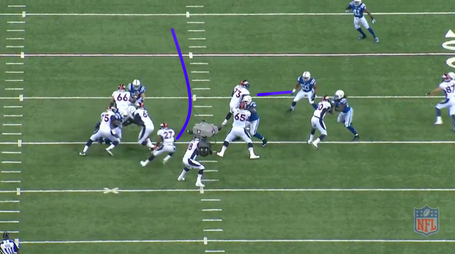 Hit: Clark's block fails and Beadles doesn't have the leverage to handle both defenders. Ramirez has also lost his block up field and the linebacker breaks free and heads toward Moreno, who is swallowed by all three players. 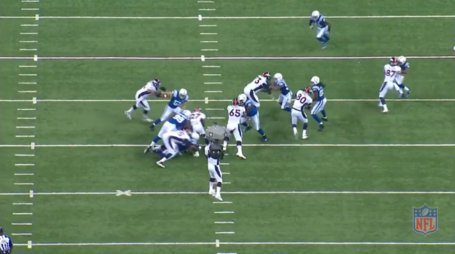 Result: Despite being well designed, Clark's lost block slows Moreno and then Ramirez's failure to maintain his block leads to the eventual tackle for minimal gain. While there was a hole, because Moreno was caught from behind he lost speed and the hole closed before Moreno could regain his speed.

Pre-play: Another well designed play, they have man blocking on the right side as Moreno is supposed to cut it wide outside from the Pistol formation. If each man picks up his block, and if the center Ramirez can get downfield and pick up the linebacker or safety, Moreno has a big gain on his hands. 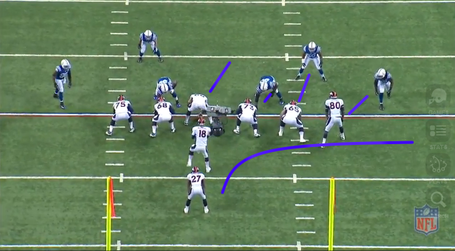 Mid-play: Right away the blocking breaks down. Kuper fails immediately off the snap and is beaten, Ramirez tries to twist and help by fails, this allows the defensive tackle free into the backfield and also allows the linebacker to move towards the play. Moreno sees this and tries to get away by cutting away from the tackle and move outside. 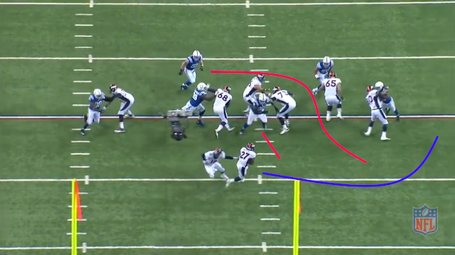 Hit: The defensive player gets to Moreno but Julius Thomas' block failed as well allowing his defender to lay a second hit on Moreno, taking him down. 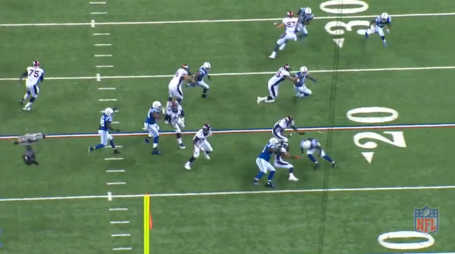 Result: When Ramirez and Kuper missed their blocks, the play was dead from that point on. Julius' missed block on the defensive end only sealed the deal, Moreno had no where to go, which is on reason those outside stretch plays can be very good or very bad depending on the blocking.

Pre-play: A simple inside run, all about power since they are stacking the box. So while it may have been poorly called, running into the stacked box, at brought in another tight end (85, V. Green) who is a better blocker and are running to his side. 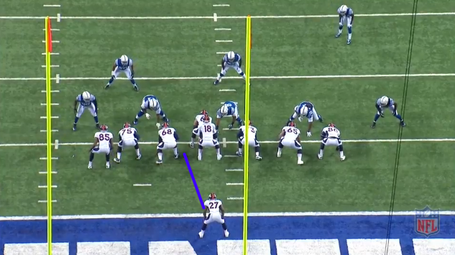 Mid-play: Green picks up the defensive end and Clark is trying to move down field and pick up the linebacker, unfortunately he takes a bad angle and can't get to him. The safety is now moving towards the play as Ramirez losses his block in the middle and his defender is now moving to catch Moreno from behind. Moreno is trying to cut it outside since Green has sealed the edge. 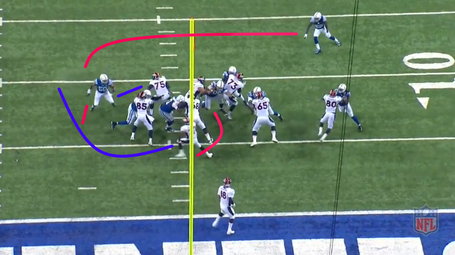 Hit: Moreno seeing the linebacker coming outside of Green stops to turn around but is caught from behind by two Colts who got off their blocks against Beadles and Ramirez. Green ended up blocking the defensive end and linebacker and is pushed back, collapsing a pocket around Moreno who goes down. 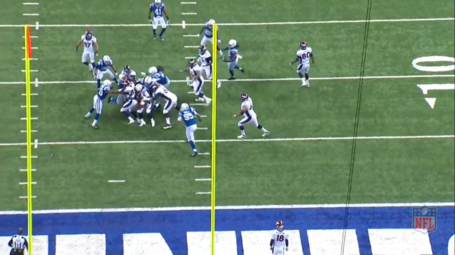 Result: Clark taking a bad angle against the linebacker and Ramirez losing his initial block immediately cause the play to have a low chance of success right away. Beadles and Green are both forced back in the end and Moreno has no where to go.

Pre-play: Here we see a good play design that gets two blockers (68 Beadles and 80 Thomas) downfield on the linebackers. Moreno will be running behind Beadles who will be moving toward the linebacker and the he'll break toward the secondary. 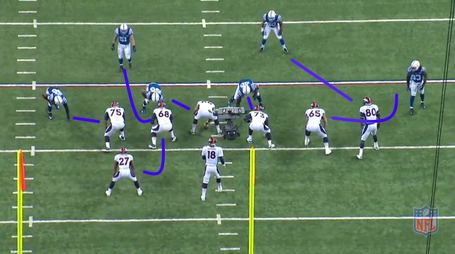 Mid-play: Every thing seems to be set up well but two cracks appear, left tackle Chris Clark is losing his man and Ramirez (66) has already lost his defender. Luckily Beadles (68) and Julius (80) are lining up their defenders, if Clark and Ramirez can hold on even a second, Moreno has a huge open field to run in. 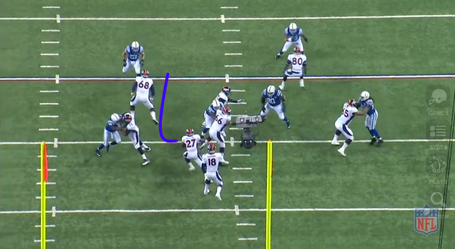 Hit: Beadles held his block up field but Clark gets pushed back into Moreno and Ramirez's defender grabs Moreno's foot. Between the foot grab and getting hit by his lineman, Moreno goes down. 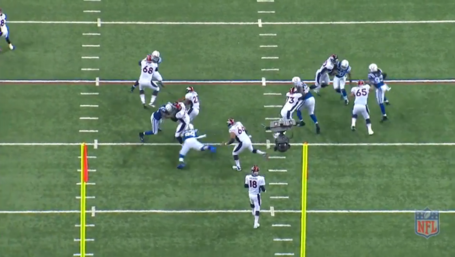 Result: Because Ramirez lost his defender and Clark lacked the strength to not get pushed back, a huge hole didn't matter as Moreno is caught from behind.

It is pretty clear the offensive line was just not up to task across the board against the Colts, as well as the Jaguars, but in terms of the run game this is the 2nd week in a row they've struggled at even holding run blocks. In the MHR Stats: Running Backs page under the Library tab at the top of the page we see that the running backs on average are getting hit at less than 3 yards past the line of scrimmage and actually Moreno and Montee are earning about half their yards after contact, Moreno actually averages 2.12 yards after contact. The past two games have proven the run blocking is a serious issue, especially Chris Clark, Julius Thomas and Manny Ramirez. Something needs to change or next week Moreno, Hillman, and Montee are going to continue to be swallowed up at the line of scrimmage.