It's the second heavy homecoming in as many weeks for the Denver Broncos, this time with two-time Super Bowl winning head coach Mike Shanahan returning to the site of his former glory. Shanahan, now head coach of the Washington Redskins, will return to Denver for the first time since he was fired following the 2008 season.

The Broncos are coming off their first loss of the season, eager to head into their bye week on a rebounding note and beat their Week 8 opponent at home. After an 0-3 start, the Redskins have won two of their last three games, and look to continue righting their 2013 season. 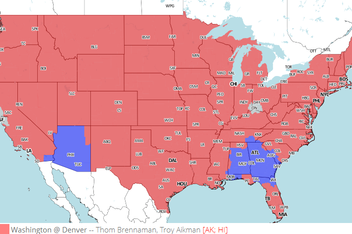 FOX will air the game nationally, with Thom Brennaman (play-by-play) and Troy Aikman (color commentary) calling the game and Pam Oliver reporting from the sideline. In Denver, that's KDVR-TV FOX 31. Those outside of Denver, check your local FOX listings.

The Broncos are 11.5-point favorites to win against the Redskins at home.

In some ways, this is Shanahan vs. Elway. Who comes out on top? Let us know in the poll and comments.