When the Broncos win, the MHR Staff gives out game balls! And win the Broncos did, a 45-21 whooping of the Washington Redskins. Alright gentlemen, who ya got?!

Is it any coincidence that when Woody comes back, this defense starts to get it's act together? He's likely to be fined for that helmet to helmet hit on Kirk Cousins at the end of the game, but so what? This dude hits hard, flies to the ball, and kept RGIII on his heels all game. Pay this man Broncos, whatever he wants. He's our Mike, our Will, our everything. - Bronco Mike

Ignore the 21 points. 14 of that came from turnovers. Outside of that 7+ minute drive before the half, the Broncos D looked the best it has all year. The Skins have a pretty dynamic offense, and the Broncos D slowed them down. RG3 was held to 5 yards rushing, and 132 yards through the air. The Broncos D caused 5 turnovers, 2 sacks(1 being a strip sack), and 4 Ints(One being a 75 yard pick 6 by DRC. The D pressured RG3 for most of the game. It was a very good showing. Hopefully they all heal up during the bye week, and get ready for the 2nd half push during the season. - Scotty Payne 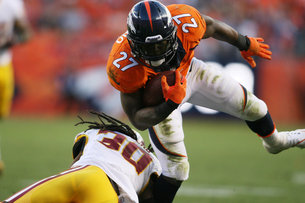 This guy topped 100 total yards for the 4th time this season and has scored a TD in 6 games of the 8 games and has 9 TD's on the season, tied for most on the team, he's beasting right now. While the OL struggled again with run blocking he didn't cared, he just caught the ball instead. This guy really is turning into one of the more valuable players on the team when it comes to versatility and utility. - Topher Doll

The man, the animal, the breakout game, the Pot Roast-- he has one of the more interesting nicknames in the history of the Denver Broncos. Knighton has started eight games at defensive tackle for the team this season notching sacks in the last two weeks. Against the Washington Redskins, Pot Roast was consistently in Robert Griffin III's face, accounting for the aforementioned sack, three quarterback hurries (one leading to Rahim Moore's interception) and two tackles.

I wasn't even aware that the defensive tackles rushed the quarterback on this team really, but beefy Knighton is getting up in there and causing chaos. Allowing for a much more diverse front four (Mitch Unrein getting a fake handoff that led to the Joel Dreessen score). At a time when fans are down on Kevin Vickerson, Knighton's stock has risen and all is not lost within Denver's front four in which the tackles usually just fill up gaps. Jack Del Rio has dialed it up once again and the Broncos get one step closer to being back where they were last season. - Ian Henson

Oh hey Von! Welcome back! I didn't notice you in the last game so I'll just take this game as your premiere. Von, you did a great job of putting all of that worry about your weight to rest. Well, that is if you're apart of Bronco nation. Good job on laying the wood this game, that strip sack was superb. Keep it up, big boy. - Mr. East

The game was quickly slipping away from the Broncos .After a 7-0 lead, the Redskins scored the next 21 points, largely from Broncos mishaps. Who could stop the hemorrhaging? Would it be Peyton Manning? Wes Welker? Knowshon Moreno? No Sir, it would be Montee Ball. There are few plays where you can say that a single player literally willed his way to score, yet here is Montee Ball, single handedly moving the pile and churning out the tough yards to break the Redskins' stranglehold of the Broncos. I have no doubts that any other running back on our team would have been stopped not only shy of the goalline, but probably for a loss. Without Montee's TD, who knows where the direction of this game goes. Could it have still bean a beatdown? Perhaps, but it also could have been a beatdown by the wrong team. That TD was a total momentum changer and quite possibly a game changer! -Big Pete

A nice bounce-back game for DRC. Rodgers-Cromartie had a team-high three passes defensed, to go along with his 75-yard interception return for a touchdown that sealed the game. It was good to see the Broncos using more man coverage looks, which is a much better fit for their best two corners this year, DRC and Chris Harris Jr. I'm pretty sure DRC can high-step faster than I can run. - Monty

Peyton Manning. Three interceptions (two of them can easily be shared with Demaryius Thomas), but still a 94 passer rating? That's insane. This is the most prolific offense in NFL history, and Manning is the reason why.

Your game balls in the comments. Go Broncos!