Game time! Week 5 NFL action features the Denver Broncos at Dallas Cowboys on Sunday October 6, 2013. Kickoff is set for the 3:25 CDT. Here is all your TV schedule, channel, radio, and game time information.

Who is America's Team? Dallas Cowboys fans coined the moniker (or at least own it now), but America's Hottest Team is without a doubt the 4-0 Denver Broncos, led by the more-accurate-than-ever laser rocket arm of Peyton Manning. In Week 5, these two teams will face each other at Dallas' AT&T Stadium for one of the highest profile matchups of both teams' seasons. 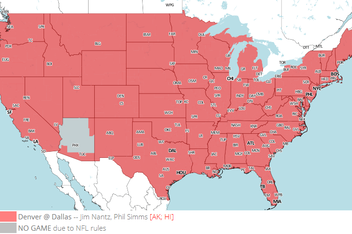 If you are in the red, you will get the Broncos game this week (click for more).

The Denver Broncos are 7.5-point favorites to win the game. I have a six-pack of brew bet against the token office Dallas fan, taking the over.