Hello folks, here to bring you some analysis in stead of tomorrow's matchup against the Dallas Cowboys. If you are unfamiliar with the Cowboys, this should fill a lot of holes on what to look for.

Share All sharing options for: Scouting the Dallas Cowboy Defense

They are 5th in the league with 14 sacks.  They have forced 7 turnovers to this date (4 INT's, 3 Fumble Recoveries).  Their defense has been very good on 3rd down allowing just 16/49 conversions (33%).  They are also 10th worst in the league allowing 21 first downs per game.

DeMarcus Ware (+2.8) and LE George Selvie (+2.3) are the only starters from the Cowboy front 4 to grade out positively against the run.

Behind the starters, you will see #55 Edgar Jones in at LE, and #51 Kyle Wilber in at RE.  Their reserve defensive tackles do not rotate as often as the Broncos.  Both #92 David Carter, and #70 Drake Nevis can be expected to see about 30% of the total snaps.  The reserve ends will see about 15-20% of the snaps.

The biggest change this week will be the start of journeyman Ernie Sims over young Bruce Carter at Will LB.  Carter was targeted by Phillip Rivers 9 times and allowed 8 receptions for 94 yards and two TD's.  He is more of an ILB in a 3-4 scheme and has struggled in Monte Kiffin's 4-3.  On the year Carter was targeted 34 times and gave up 24 receptions for 254 yards and a passer rating of 111.6.

In his stead, Ernie Sims (the same guy who mouthed off about being tired of all the talk surrounding Peyton Manning) has been targed 3 times for 3 receptions and 33 yards.  Let's just say the old vet isn't a major step up.

Mike LB Sean Lee has a positive grade overall.  He leads all cowboy defenders with 38 tackles and 12 stops.  (A stop by PFF standards is something that causes an "offensive failure" so think of these as drive killers).

Here is were PFF grades don't make a lot of sense to me.  He's been targeted 17 times and allowed 14 receptions for 163 yards and 4 TD's yet still has a positive grade in pass coverage.  Lee isn't isn't a force to be reckon with in coverage.

Sam Justin Durant hasn't seen a ton of snaps (90 thus far), which indicates to me a lot of time for the Cowboys in their subpackages.  Durant has only been asked to rush the passer TWICE from the SLB position which shows you the fundamental difference between the way Monte Kiffin runs a 4-3.

Our starters at CB are Brandon Carr and Morris Claiborne.  Carr has been targeted 20 times and allowed 11 receptions for 170 yards and no touchdowns.  He does have one interception on the year.

Claiborne has been targeted 24 times and allowed 16 receptions for 286 yards (125 after the catch).  He has yet to allow a TD or make an INT.

At safety in base downs, we have Barry Church J.J. Wilcox .  Church has 11 targets, 9 receptions (50 yards) and 1 TD.  Will Allen started the year as the starter but has been replaced the last two games by Wilcox.  Wilcox has 5 targets for 3 receptions for 27 yards.

Orlando Scandrick who is listed as a backup corner, has actually played a significant amount of snaps as the nickel back the last two games.  On the year, Scandrick has 21 targets and has allowed 13 receptions for 75 yards and 1 TD.

Base 4-3, funny personnel use 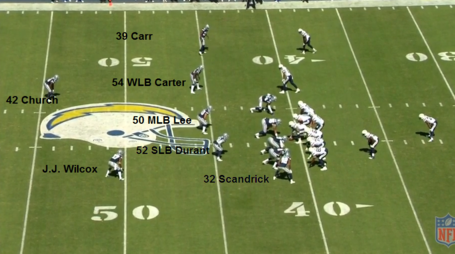 Ok, odd look here.  Like I said, Ernie Sims can be put in for Carter but note that the Cowboys are in a pretty standard 4-3 personnel.  No Mo Claiborne here.  What makes this weird is that against 21 personnel, they line Scandrick up and blitz him, having Carter instead line up on the slot receiver to the top.  Carter will play zone.  Church drops back to play centerfield and it leaves the slot guy ALL ALONE in the middle.  Wilcox sees this and eventually gravitates towards that player. Rivers targets Carr anyway.

Scandrick who I thought at first might be placed on Gates on the bottom of the snip, blitzes.  The FB picks up up beautifully.  Durant (the Sam LB) is charged with covering Gates.

Just to break down how different Monte Kiffin uses players here is the Bronco equivalent.  Chris Harris at the bottom blitzing, Von Miller/Nate Irving covering Gates.  Whatever it was, someone in the secondary screwed up the call.  I can guarantee you from watching these guys they aren't all on the same page. Here's an example of what the Broncos are likely to see quite a bit. 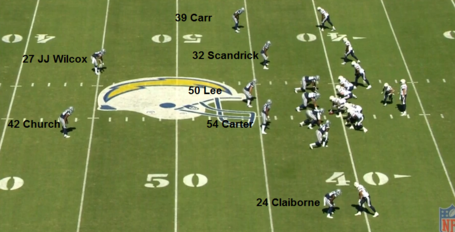 Scandrick moves to the slot, Claiborne comes in on the outside.  On this play, Rivers motions out Danny Woodhead which makes Carter move down to cover him.  That leaves Sean Lee one on one with Antonio Gates.  Just something to think about Broncos Country.  That could be Julius Thomas on Lee tomorrow.

I don't see a lot of changes in their secondary as far as exotic blitz schemes.  They will rely on their front 4 to get pressure.  Scandrick is the ONLY Cowboy DB that has recorded a sack, hit, or pressure.  They do not bring their linebackers all that often as Sean Lee and Bruce Carter have combined for 7 hurries total.

They mix zone coverages quite a bit over the top, but I would expect someone like Brandon Carr to draw man on man duty against Demaryius Thomas.

One final note.  On both of Danny Woodhead's TD receptions, Phillip Rivers motioned him from the backfield essentially putting him in a one on one situation against Bruce Carter.  Sims might be a little better than that, but I would still take Knowshon or Ronnie Hillman any day of the week.

This should be fun Broncos Country, their defense is not the least bit intimidating.  If Clark can keep Ware in check with some occasional help from a TE or RB, and Zane Beadles can handle DT Jason Hatcher, Peyton Manning is going to have all day to throw.