Broncos vs. Cowboys: Five Questions with the Enemy

Questions answered by the Dallas Cowboys experts over at Blogging the Boys.

Share All sharing options for: Broncos vs. Cowboys: Five Questions with the Enemy

1. Tony Romo is probably one of the most controversial quarterbacks in the league. What is the fanbase's opinion of him four games through the season?
Well, I won't speak for the fanbase but I will give you my opinion. Romo has looked pretty good through the first four games but I've seen him play at a higher level. One of the problems in the past has been a shaky offensive line but this year he's getting good protection. I thought that once he had that (protection) his numbers would skyrocket but they really haven't. His yards per attempt are too low for this type of offense and I'm not sure how much that has to do with Romo and how much that has to do with the play-calling under Bill Callahan who took over that aspect of the game this season. The Cowboys haven't worked the vertical passing game well this season and that was a staple of their offense previously. Romo says that when the opportunities to go deep (or even intermediate) are there that he is taking them, but I think he might be being a little cautious trying not to commit turnovers and taking what defenses are giving him. In the past I would have concurred with this strategy but I think he he, or the play-caller, need to at least take some shots downfield. 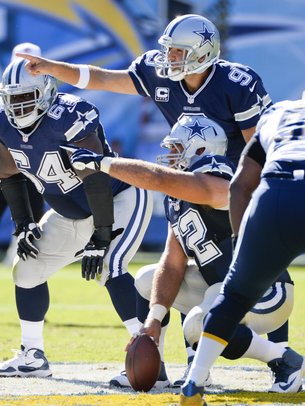 2. Dez Bryant has been a beast through the first four games. If he gets stuck being doubled all game, who will step up in his place?
Jason Witten is the guy who will be targeted more often than not but defenses recognize that and do everything they can to slow him down. Normally, the Cowboys would also turn to Miles Austin but he's looking very doubtful for this game because of a hamstring injury. His replacement is rookie Terrance Williams who has the speed and ability to do some good things but last week he had a critical fumble. Hopefully that hasn't shaken his confidence and he'll be able to produce on Sunday. Dallas will also use DeMarco Murray out of the backfield in their passing attack. But, given all that, Dez has to fight through the double teams and still produce, that is what all elite receivers do and Tony Romo has to trust him on occasion to go get the ball even when he's doubled.

3. What is the biggest surprise of this Cowboy's team so far?
I'd have to say the offensive line has been the biggest surprise. They have been a major problem for the Cowboys for years. This offseason and through training camp the Cowboys made some moves to improve the line and it seems to be paying off. Rookie draft pick Travis Frederick is doing very well in his first season at center. The Cowboys signed veteran Brian Waters to play guard upgrading that position and they are trying a young kid at the other guard spot, Ron Leary. All three spots along the interior have new players and it's working so far. Also, Doug Free at right tackle has been playing superb football after stinking up the joint last season.

4. What part of this Dallas team scares you the most?

5. If you could take any Bronco player and put him in a Cowboy uniform this Sunday, who would it be?
Well, I don't think there's much choice here. I mean Peyton Manning is one of the very best quarterbacks to ever play the game.

Big thanks again to Blogging the Boys for taking the time to answer these questions!