When the Broncos win, the MHR Staff gives out game balls! And boy did the Broncos win a big one this week... here are game balls following Denver's 51-48 nailbiter victory over the Dallas Cowboys in Week 5.

For 57 minutes and 30 seconds, Denver's defense couldn't make a play to save its life. But then, with the game on the line, linebacker Danny Trevathan came up with the interception that made all the difference. Whether it was a bad decision or a simple misstep on Tony Romo's part, the opportunity still presented itself, and Danny Trevathan made the play when it mattered. Four days after getting carted off the practice field with an injury, Trevathan persevered in the midst of a host of other Broncos defender injuries. For that and his timely interception, he gets my MHR Game Ball. - Monty

I cannot recall who penned the nickname "The Four Horsemen" a few weeks ago when talking about the quadruple threat of Demaryius Thomas, Eric Dekcer, Wes Welker, and tight end Julius Thomas. You can cover some of them some of the time, but never all of them all of the time. Week in and week out, teams are forced to pick their poison and the poison they pick ends up killing them to the tune of 46 points per game. Over five games, the Denver Broncos are actually averaging nearly fifty points per game. It's unheard of. It's inconceivable. It's otherworldly.

In this game, Julius Thomas was the poison the Dallas Cowboys chose and it cost them early and often. To the tune of 9 catches for 122 yards and two more touchdown receptions. Orange Julius is a beast, but so is Demaryius, Decker and Welker. This offense is on an historic pace and the only way they'll be beaten is if they beat themselves or if the Broncos are down five starters on defense again and give up 50 in a single game. - Tim Lynch 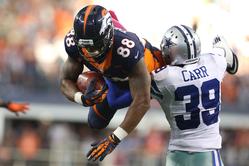 Outside of Peyton Manning, Moreno has been the most important Bronco in my eyes. Moreno rushed the ball 19 times for 93 yards(4.9 yards per carry, and caught 5 passes for 57 yards. That's 24 touches for 150 all purpose yards. That's pretty good. Moreno also added a rushing touchdown, his 4th on the year. Moreno's game only makes Peyton Manning that much more dangerous. - Scotty Payne

For years I sucked the back of my teeth as fans and bloggers would say things about the best offense being a good defense, consistently pointing out the the best defense is a good offense. Down five starters (Champ Bailey, Von Miller, Wesley Woodyard, Chris Harris and Robert Ayers), the Denver defense was flogged badly, but came up just in time to give Manning and the offense a shot. Manning consistently played heads up with a tip of the hat towards the defense, running the ball when the Dallas defense could not stop the pass. He had his first interception today, but after so much perfection it would have been godly for him not to have.

The greatest quarterback in NFL history and he placed icing on the cake twice today, once with the naked bootleg and again as he stumbled his way towards winding the clock and better field position for Matt Prater's final field goal. - Ian Henson

Tough teams win tough road games. Today is the kind of day that a kicker earns his paycheck for the entire year. Prater added 15 points by being a clutch three of three (one of which for 50 yards), away from altitude. Without him, this game would have been out of reach. The kicker is the most thankless position in all of football, so lets all make an effort to let Prater know he's the man. - Mr. East

I thought it was terrible news when Clady went down (it is). But the fact of the matter is that Clark has played brilliantly in his stead. All he did against the Cowboys is shut out one of the best pass rushers in the game. I sure was wrong about Chris Clark and I couldn't be happier to admit it! A mile high salute to the big man protecting the blind side. - Bronco Mike

My game ball goes to Eric Decker, here is a guy who is showing how to bounce back from troubles. After a fumble early in the game he showed up big with 87 yards and a touchdown with 17.4 yards per reception. He had a dominant game with no drops and was physical in the blocking game as well, helping bust two of the bigger Moreno outside runs. He's also almost caught DT for the receiving yards leader on the Broncos. - Topher Doll