The Broncos dominated early then held on for dear life to defeat the Chargers 28-20 in Week 10.

The Denver Broncos improved to 8-1 after a dominating first half and shaky second half against the San Diego Chargers (4-5) that saw Peyton Manning throw four touchdowns in three quarters (three to Demaryius Thomas) and, as he's done all season, break more NFL records. Up 28-6 in the third quarter, the Broncos had to come up with a defensive stop and handful of first downs to seal the victory 28-20 in Week 10. Tight end Julius Thomas also hauled in a 74-yard touchdown pass in the win. 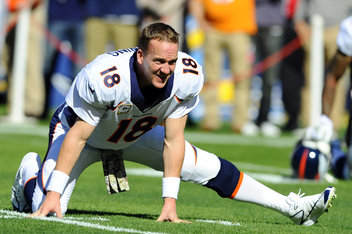 Low takedowns by Chargers defenders Larry English and Corey Liueget had the Broncos QB admitting he was "pretty sore" Sunday, but the QB will "absolutely play" vs. Kansas City, according to the Denver Post.

Immediately, the Broncos set the tone. Denver forced a three and out, but the Chargers got clever and faked the punt for a first down. It didn't make much difference though, as a holding penalty put the Chargers in a 1st and 20 situation from which they would never recover.

The Chargers went back to work on a long, clock-killing drive led by running backs Ronnie Brown and Danny Woodhead and helped by pass interference penalty from former Charger Quentin Jammer. QB Philip Rivers was able to escape pressures from Kevin Vickerson and Von Miller, then hit Ladarius Green for a 25-yard gain to get San Diego in the red zone. Then Philip Rivers - wonk wonk wonk- ran for a solid five years but slid down a few yards shy of the first down with room to spare.

First quarter has come to an end. Chargers lead time of possession 14:03 to 0:57, but #Broncos lead on scoreboard 7-0. #DENvsSD

The conservative mistake cost the Chargers a touchdown, as San Diego would settle for a field goal two plays later, on the opening play of the second quarter. Denver 7, San Diego 3.

The Broncos and Chargers trade punts - Peyton Manning was sacked by Larry English on third down, while Quentin Jammer nearly picked off Philip Rivers a few minutes later. A series later, Welker dropped a third down catch, and the Broncos were forced to punt again. To that point, the Broncos had only run nine plays for 99 yards - not a bad total in itself, but when 74 of those yards came on one Julius Thomas catch, the flatness becomes clear.

The Chargers started their next possession on their 41-yard line, then Ryan Mathews ran past Mike Adams and everyone else for 35 yards to give the Chargers even better field position. The drive stalled after a Rivers incompletion in the end zone, and the Chargers settled for a field goal. Denver 7, San Diego 6.

Then Manning and the NFL's fastest, best offense went back to work, with the wide receivers finally getting involved - Wes Welker made a two-yard grab, then Eric Decker caught a pass for 34 yards to represent Manning's first passes to wideouts. Demaryius Thomas finished the drive with a plane-breaking, football-hovering acrobatic touchdown in the front corner of the end zone to put the Broncos up with six minutes left in the second quarter. Denver 14, San Diego 6.

Rivers and offensive coordinator tried to run the rest of the half clock out, but some well-taken time-outs by the Broncos and a huge sack by Derek Wolfe forced the Chargers to attempt a field goal with 1:38 left. Nick Novak pushed the 37-yard field goal wide left, and the Chargers left the Broncos and Peyton Manning with way too much time. The NFL's mid-season MVP went to work, with one timeout.

Then Manning goes deep and starts using his sidelines; Wes Welker converts a beautiful 3rd and 5 with an 8-yard grab, then Manning hits Demaryius Thomas deep for a sideline catch to the 7-yard line. One play later Thomas and Manning finish the job with a touchdown.

With 1:38 left in the half, the Broncos didn't even need a timeout to score a touchdown. Denver 21, San Diego 6. 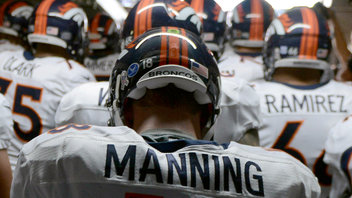 Knowshon Moreno opened the third quarter with a seven-yard run - just the fourth rushing attempt by the Broncos in the game. He finished his first down with a five-yard run a play later. The Broncos continued to run the ball, finishing their longest drive to the Chargers end zone with Demaryius Thomas' third touchdown of the day off a beautiful 25-yard screen play. Denver 28, San Diego 6.

The Broncos forced a Chargers three and out, and all signs pointed to a Denver blowout. But then disaster struck, and the requisite play where a defender (Tourek Williams in this case) gets by left tackle Chris Clark and strip-sacks Peyton Manning. The Chargers recovered the fumble with terrific field position, and Philip Rivers made quick work of the short field. A Danny Woodhead touchdown catch put the Chargers within two scores with 8:38 left in the third quarter. Denver 28, San Diego 13.

The rest of the third quarter was a punt-fest. The Broncos offense tried again to keep the game out of the reach, but couldn't do so, as they were forced to punt at midfield after a handful of yards. So the defense went to work, led by a huge homecoming play from defensive end Shaun Phillips to sack Philip Rivers (sharing the sack with Von Miller).  Chargers punt. Then, after back-to-back incompletions from Julius and Eric, the Broncos punt.

All those punts meant two things - the Broncos were letting the Chargers hang around, and the momentum was in the Chargers' corner. San Diego took advantage on their next possession and drove 60 yards in nine plays, led by an Antonio Gates catch of 24 yards and an Eddie Royal grab of 30, both against Chris Harris, Jr. Ultimately Ryan Mathews was able to stretch the football into the end zone for the touchdown, making it a one-score game. Denver 28, San Diego 20. 10:38 left to play.

Then the Broncos punted again. Thing were looking dire.

Last 4 Broncos possessions: Fumble, Punt, Punt, Punt. Only 1 of those drives had more than 3 plays. @MileHighReport

So the defense went to work, tasked with stopping a Chargers offense with a ton of momentum that made the contest a one-score game when they were down 28-6 in the third quarter. They were able to stop the Chargers with great pass pressure; Malik Jackson tackled Rivers for no gain after a fumbled snap, then Von Miller sacked Rivers to force a 3rd and 12. Rivers threw quickly to Eddie Royal, but the pass was broken up by Chris Harris Jr., forcing the Chargers to punt.

With 3:26 left in the game, the best offense in the NFL simply needed a few first downs to seal a victory. They got them -  a big pass to Demaryius Thomas and big run from Knowshon Moreno guaranteed the Broncos would improve on their record to start the second half of the 2013 NFL season.

Peyton Manning came up lame at the end of the game in a heart-attack inducing limp-fest, but looked better in the post-game. Don't be surprised if the Broncos catch a later flight out of San Diego so Manning can have a bit more time in that ice bath.

And with that win @DenverBroncos owner Pat Bowlen records his 300th win over a 3 decade span. Congrats on your NFL record!! #DENvsSD