Manning wouldn't specify the injury, saying he was hit "twice in the lower area."

"I'm pretty sore," Manning said after the game. "They kind of got me twice in the lower area." 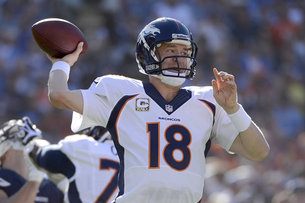 It was a little too close for comfort as the Broncos let a 28-6 lead become a one-score game against the Chargers in Week 10.

One play near the very end of the game was particularly harrowing, and a low blow by the desperate Chargers.. Defensive end Corey Liuget wrapped up Manning late and low after Manning got the ball out - a flag should have been thrown but wasn't - and Manning limped heavily around after the play.

The other play was likely a sack by Chargers linebacker Larry English early in the game, where he grabbed Manning low and twisted him to the ground.

Manning wouldn't specify what part of his "lower area" would be receiving an MRI exam, but he has been reportedly dealing with ankle injuries since the Jacksonville game. It's also possible he might have suffered a knee injury based on how he fell from Liuget's takedown with less than two minutes to play.

Manning was able to finish the game, so we don't expect the worst, especially when you consider he said he already had an MRI earlier. But it's bizarrely worth noting: depending on the outcome of this MRI, it's possible the Kansas City Chiefs could yet again play against a backup quarterback this Sunday night.