Our weekly look at the top Broncos performers on both sides of the ball according to Pro Football Focus. The Broncos beat the Chargers 28-20 in Week 10. Here's how they graded out, including our Week 10 Teammates of the Week.

Share All sharing options for: Denver Broncos Week 10: In Focus

WR Demaryius Thomas - 3.8. - Demaryius Thomas scored three touchdowns against the San Diego Chargers in myriad ways. An out route, slant route, and screen all led to DT TD's; San Diego had no answer for the versatile third-year pro. 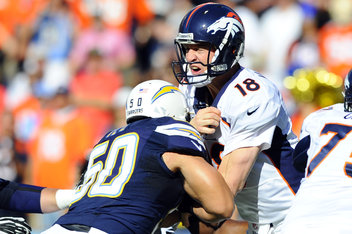 TE Julius Thomas - 2.4 - Taking a 4-yard dart 74 yards for a touchdown set the tone early for the Broncos, but it was one of Julius' better days as a blocker as well. His 0.1 grade as a pass blocker is nothing special, but it is an improvement from his often-negative marks in that area, while his 1.1 grade as a run blocker was 2nd only to Vasquez team-wide.

Von Miller - 5.8 - Von Miller has been the Broncos' top-graded defender every week since his return in Week 7. His impact is being felt in both the run and pass game as Von proves to be virtually unblockable. In Week 10 he had five QB hurries and a sack, and helped Shaun Phillips finish off another sack in the former Chargers' homecoming.

Teammates of the Week

The Broncos defense definitely deserves credit for sacking Chargers QB Philip Rivers four times - he had only been sacked 12 times all season to that point. Vickerson and Knighton are awarded our Teammates of the Week.

Kevin Vickerson - 2.4 - Does a huge day from Big Vick help me forget his repeated personal foul penalties of late? No, but it certainly helps - especially since he remained unflagged in Week 10.

Terrance Knighton - 1.9 - After looking invisible in the early parts of the season, Jack Del Rio's free agent gamble is paying off big-time of late. Knighton had two QB hurries rushing up the middle and three stops on the day. The efforts of Vickerson and Knighton make these two our Teammates of the Week!

How would you grade the Broncos in Week 10?