One of the greatest regular season moments was this Monday Night Football game between the Denver Broncos and the Kansas City Chiefs, led respectively by John Elway and Joe Montana. Final Score: Chiefs 31, Broncos 28

Share All sharing options for: Elway vs. Montana: A Game for the Ages (1994)

Often times, the best sports memories come from one's own childhood. As an adult, we tend to have better analytic skills and objectivity, but as children we are pure emotion. And from that emotion is forged one's fanaticism for their team.

The Monday Night Football showdown between Joe Montana and John Elway was likely one of those moments for many Chiefs fans now in their late 20's or early 30's. Several years earlier, I had my moment with The Drive, but by the time this game came around, there was no denying my own Broncomania. Because of that, I was able to appreciate this loss a little better than I would have had I been 8-10 years old instead of 16.

This truly was one of the regular season games of the Decade. Two first ballot Hall of Fame quarterbacks on above average football teams, slugging it out in front of a national audience. You couldn't ask for a better situation for the advancement of the National Football League.

What makes a rivalry? 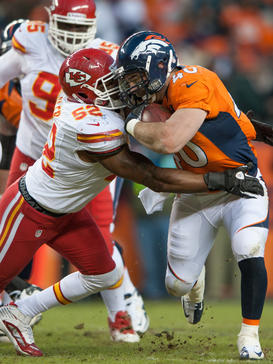 My biggest takeaway from that game was anxiety. Watching the clock and feeling like whoever got the ball last was going to win it. Then the heartbreak of realizing it would be the Chiefs who would have the ball last. After an Elway-led touchdown drive, Montana came out to deal is own touchdown blow with only seconds left in the game. It was one for the ages for sure.

Elway and the Broncos struck first in the second quarter and from there it was a back and forth game all the way to the finish. Tied 14-14 at halftime, Montana came out with touchdown drive to take the lead, only to have it tied up again by an Elway 20 yard strike to Jerry Evans. The games first field goal after a goal line stand by the Broncos defense, gave the Chiefs the lead at 24-21.

That's when things got interesting. With under two minutes to go, John Elway took his team on a short field down into the red zone where Elway decided to make it happen on his own, rushing four yards for the go ahead touchdown. The Broncos were up 28-24 with just one minutes and twenty-nine seconds.

Way too much time for Joe Montana. He would need all but eight seconds to complete seven out of eight passes for 75 yards and a Bronco killing touchdown pass to Willie Davis. Montana finished with nearly 400 yards passing in the seasons most thrilling regular season game.

Montana, when asked about leaving no time for Elway to mount his own comeback,

You can't afford to give a player that relishes being in that time of the game any time on the clock. And the best thing you can see is when it says zero, because then you know, even if he's got the ball in his hand, he can't do anything with it.Montana left Elway no time to win that Monday Night game, but Elway would come back to Arrowhead later in the season and beat the Chiefs in a belated comeback. However, most remember that Monday Night Game. And why shouldn't they? It's one of the all-time greatest regular season games. Even though the Broncos lost, we can still appreciate a great moment in NFL history.

There is another matchup like this on the horizon. Peyton Manning and Tom Brady are matching up on primetime for another game that has this kind of potential. An aging future Hall of Famer with his new team going into the lions den against another future Hall of Famer against the team that drafted him. Could be fun, especially if the Broncos end up on the Montana side of things this time around.