Broncos-Chiefs game - the other one - flexed to afternoon timeslot, NFL announces

The Week 13 December 1st matchup between the Broncos and Chiefs has been flexed to an afternoon timeslot, the NFL announced. No changes to this week's primetime game, which still has a kickoff time of 6:30 p.m. MT on Sunday November 17th.

Share All sharing options for: Broncos-Chiefs game - the other one - flexed to afternoon timeslot, NFL announces

As if this year's Chiefs-Broncos matchup wasn't special enough, the NFL decided it deserved to be flexed - again. 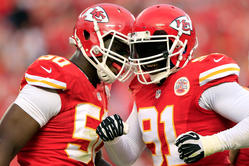 The NFL has announced that the Week 13 matchup AT Arrowhead on December 1st will be flexed to an afternoon timeslot with national CBS coverage. Kickoff will be 3:25 CT / 2:25 MT. Below is the NFL's release.

As we're sure you know, the NFL earlier flexed this week's Chiefs at Broncos matchup to Sunday Night Football. This change is only for the Week 13 game on December 1st.

The New York Giants-Washington Redskins game on Sunday, December 1 is still tentatively scheduled for NBC's SundayNight Football. The final Week 13 schedule will be announced no later than Tuesday, November 19.

The NFL uses "flexible scheduling" on Sundays in Weeks 11-17. Flexible scheduling ensures quality matchups in all NFLSunday time slots in those weeks and gives teams a chance to play their way onto primetime and into the late-afternoon4:25 PM ET time slot on CBS or FOX.

For each flexible scheduling week with the exception of Week 17, the NFL announces the start times of games on Sundays no later than 12 days prior to that weekend. To ensure a Sunday night game and doubleheader games with playoff implications in Week 17, flexible scheduling decisions for that Sunday can be made on six days notice.