This is the first such award DT has earned in his young career.

Denver Broncos wide receiver Demaryius Thomas was named AFC Offensive Player of the Week for the first time in his career, the NFL informed the Broncos on Wednesday.

Thomas caught seven passes for 108 yards (15.4 avg.) and a franchise record-tying three touchdowns in Denver's 28-20 win against the San Diego Chargers on Sunday. His performance came almost 10 years after the last time a Bronco reeled in three touchdown catches (Shannon Sharpe vs. S.D., 11/16/03). 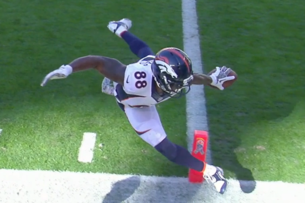 His three touchdowns were the most in the NFL in Week 10 and pulled him into a tie with teammates Julius Thomas and Wes Welker for the AFC lead in receiving scores (9). Together, they represent just the third trio in NFL history to each record at least nine touchdown receptions in a single season.

Thomas' accomplishment marks the third Offensive Player of the Week recognition for a Bronco this season (Peyton Manning, Weeks 1 & 3) and the 51st in team history since the award was initiated in 1984. He is the first Broncos wide receiver to receive the honor since Brandon Marshall's NFL-record 21-catch performance at Indianapolis in Week 14 of 2009.

Demaryius' performance marks the 12th time in franchise history a player has caught three touchdowns in a single game.  The very first to do it was Lionel Taylor the Denver Broncos Inaugural season.