"They're doing a great job-number one in the league in terms of taking it away and number one in terms of not giving it away. That is one of the main reasons why they're sitting on top of our division right now. So excellent job by them. They're 9-0. They're on top right now. They've got the lead. They're out in front and everybody else is chasing them. They've earned that. They've done a nice job. [Head Coach] Andy [Reid] has done a nice job with the team. So we're getting ourselves ready to combat that." 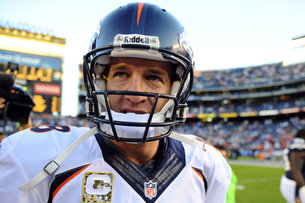 "Not really, yet. You have to sustain it over time. But certainly, that was a special unit that I was fortunate enough to be a part of there in Baltimore. So, we’ll see. There have been a few teams that have kind of approached what we did in 2000 and haven’t quite matched it. But every year you get new opportunity. Somebody gets an opportunity to try and chase that down."

"Yeah, I was able to do the walkthrough. I'll go through some of the different looks and then was able to use the rest of the time to try to get ahead with treatment, just try to get a day ahead. I was able to be in all the meetings, and got a good start on these guys, mentally, which is important. They're a new defense, as far as having a new scheme, so last year's film doesn't carry a lot of weight. So you've got to study based on what you've seen this season-some of their new players and new defensive coordinator. They're playing really well on defense, no question about that."

For the past three or four weeks, this is the game everyone's been talking about. We put it on the back burner until now. We'll be juiced up, just like the fans will be juiced up. Terrance Knighton

"They've got a great defense. I believe they're probably the best in the game at it. We watched them on film-they do a lot of great things. Rushing the passer; they press the whole time, they play a lot of man. Their front seven doesn't give the quarterback that much time to get the ball off, so we're going to have to be perfect with our routes-we're going to have to be urgent and quick. We've got some work on our hands, but I think we'll be fine."

DT Kevin Vickerson on Jamaal Charles being as dangerous as ever

"Most definitely, he's-in my eyes-one of the top two backs in the league. He's explosive, he's a good back. At the same time, we just have to do what we do and focus in, read our keys and doing our job."

P Britton Colquitt on his brother

How has Manning done vs. the NFL's best defenses? 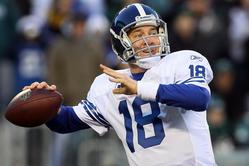 "We talk just the same, I guess. We always talk during the week. We get mixed up with our kids and stuff like that so we just text nowadays a little more than talking. But it doesn't change. We're excited to see each other. There is no more wanting to play better than normal because you always want to help the team out and do your best job. We just enjoy each other and I don't necessarily root for him to have a bad punt or anything like that. I just want us to get good field position-so maybe [WR] Trindon [Holliday] will have a good return. But we're kind of each other's biggest fans. Nothing really changes, I guess."

WR Eric Decker on the Chiefs

"A very, very good team, a very sound team defensively. They've got one of the best front sevens. The back end-they've got some big DBs and they're aggressive. They're physical and they've been playing well all season. There is a reason why they are 9-0."

DT Terrance Knighton on the excitement this week

"It seems a little bigger. For the past three or four weeks, this is the game everyone's been talking about. We put it on the back burner until now. We'll be juiced up, just like the fans will be juiced up. Everybody is wanting to see it so they moved it to a primetime game."