Note: This article was inspired by one of the NFL's oldest rules—the object of the game is to score the most points.

What a week it has been in Twitterland (and on all of the Internet). When two rivals are in a heated battle to take home the division title, things start to also get heated among the fans.

Today I want to address some topics that have been brought up on my Twitter timeline. First of all, the issue of the Kansas City Chiefs' stout defense. There's no denying that Kansas City has an impressive defense—that's a given.

With that said, the old cliché is seriously starting to get really old.

So, do punts win championships?

This guy's take on quarterbacks is laughable, but that's not even the point. The point is this: defenses are great, but offenses score points.

In order to beat the Denver Broncos, you will have to score points. As long as Peyton Manning is healthy, Denver is going to be putting points on the board. It goes back to football's most basic rule—you have to score the most points to win the game.

@JonHeathNFL i don't think it's even a matter of keeping up, it's a matter of forcing turnovers and forcing fgS/punts

So you're telling me that the Chiefs don't have to keep up with the Broncos, they just have to force turnovers and punts? Three weeks ago, Manning had four turnovers against the Washington Redskins and the Broncos won 45-21.

Turnovers must be avoided by Denver's offense, but it means nothing if your defense forces a turnover and your offense is unable to exchange that turnover for a score (preferably a touchdown). Maybe the Chiefs will force a few turnovers, maybe they'll force a few punts—that would be a big accomplishment.

Only four nine-game starters have punted fewer times than Britton Colquitt this season. So forcing Denver to punt is a big deal, but it won't help Kansas City if they punt it right back to Denver. The other Colquitt, Dustin, has punted 55 times this season, which is the second-most in the NFL.

One of these brothers has punted 33 times (29th-fewest) this year. The other has punted 55 times (2nd-most). #KCvsDEN pic.twitter.com/6pLvFYjS0f

In October, the Indianapolis Colts defeated the Broncos by scoring 39 points. Earlier that month, the Dallas Cowboys put 48 points on the board and barely lost. The New Orleans Saints are scoring 29.4 points a game (second most in the NFL, behind only Denver's 41.2). You have to have an offense that can score in bunches to knockoff the Broncos, because they know how to overcome a few turnovers and punts.

The Chiefs have allowed 12.3 points a game this season. Denver has scored 41.2 points a game. If you split the average, Denver is left with 26.75 points.

Denver's defense has allowed 26.4 points a game this season. Kansas City has scored 23.9. If you split the average, the Chiefs score 25.15.

That gives the Broncos a 26.75-25.15 victory. Coincidentally, 25 points is the magic number for Denver this week.

On average, the Broncos score 17.3 more points than the Chiefs every week and some are arguing that Denver's defense has been more impressive in recent weeks than Kansas City's.

I really think the game has been looked at all wrong. I don't see a high scoring affair. I just think that Broncos D playing good enough...

that if they hold KC to 13 points or so, they can pout up some TD's and field goals and win.

In their last game against the Buffalo Bills, the Chiefs allowed C.J. Spiller and Fred Jackson to combine for 254 yards from scrimmage (take notes, Knowshon Moreno). Meanwhile, Denver's defense is allowing just 87.0 rushing yards a game, which is fourth best in the NFL. 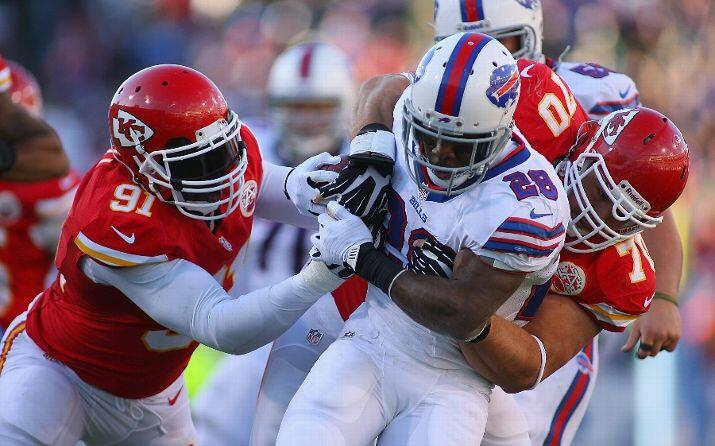 The data says no, they don't. The No. 1 ranked defenses have 2-6 records in Wild Card contests. Click here for more.

One can make stats say whatever one wants, but there is no denying that Denver's defense has been on the rise in recent weeks, and Kansas City's offense is anything but potent. The Broncos have already faced strong running teams this season (see: Eagles, Philadelphia) and won. The only thing that can beat this team is a strong offense.

I am only beating a dead horse, however, as Brian Shrout has already debunked the championship defense myth in this brilliant article. Now it's on to a few other topics that have gotten under my skin.

So, you don't want to talk about last season?

Every now and then a Broncos fan will throw out the fact that Kansas City is still the team that went 2-14 last season. Chiefs fans will respond with, "that's irrelevant, all that matters is that the Chiefs are 9-0 right now." That's a fair argument and I can't debate against it—the Chiefs are obviously a good football team.

But then this topic always comes up:

@ArrowheadPride @JonHeathNFL another nice graph would be # of playoff games as a Bronco Manning has won compared Tebow. #justsayin

All your buddies just told me that what happened last season doesn't matter!

If Kansas City fans want to talk about this season, please, stay on topic.

Let's play nice, shall we?

And then there's this:

@JonHeathNFL tweet me on Sunday, when your QB is dead.

First of all, he's not my quarterback. He's under contract for the Denver Broncos. I merely cover the Broncos. (Of note, I've been covering the team since 2008, long before Peyton arrived).

Second, really? You had better believe I'll tweet ya on Sunday night, Golden Child. You can count on that.

Is it Sunday yet?