We look at the Smarter Stats of Football Outsiders each week to gauge the efficiency of Denver's upcoming opponent. Recall that in FO, a negative DVOA is good on defense, bad on offense and special teams.

Are you ready for some surprising statistics about the Kansas City Chiefs? They're not the defensive juggernaut their top-ranked scoring defense implies, and they're a tad more efficient offensively than you probably think. Oh, the marvel of advanced statistics adjusted for strength of opponent. 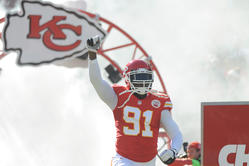 Broncos fans are familiar with this story - a surprising red hot start to a season that got exposed once the competition kicked it up a notch. That's the tale of their 2009 season under Josh McDaniels that saw the Broncos start 6-0 then falter to an 8-8 record. That Broncos defense wasn't dominant in all statistical categories, but they led the league in scoring defense, and they "came up with turnovers at the right time" and "found a way to win" in the season's early goings. That's what Broncos fans were saying at the time, anyway. "You can ignore the other stats, just look at the insanely low 11 points allowed per game!"

In hindsight, those Broncos weren't good, they were lucky, and these same trends are being followed by the Kansas City Chiefs this year. Let's expose them for who they really are.

-3.4% - 18th - The Chiefs haven't put up big numbers on offense, but they haven't turned the ball over either. Their conservative, consistent approach has served them well, as running back Jamaal Charles and quarterback Alex Smith have done just enough to keep their team ahead, leading to the most important number of all, that 9-0 record.

Smith is in the middle of the pack as far as quarterbacks go, but Charles is ranked 4th in the AFC in DYAR, with measures a running back's value over a replacement player, adjusted for the defense he is facing.  What's perhaps most surprising about this Chiefs offense is its offensive line. FO ranks Kansas City first in the league in run blocking, while pass protection received low marks at 25th.

Chiefs at Broncos: Everything you need to know

-10.2% - 7th - This is all anyone is talking about - that Chiefs defense vs. that Broncos offense. Indeed, it will be the toughest defense the Broncos have faced to date. But the Chiefs are a bend-but-don't-break defense. They've allowed opponents 11 red zone snaps on their one-yard line this season, and they have actually outscored those opponents 7-0 on those snaps.

The Chiefs are 2nd in pass defense with a -18.7% DVOA, while their rush defense leaves something to be desired ranked 26th overall. Their defensive line is ranked high at 8th against the run and 3rd against pass blockers, led by emerging star Dontari Poe.

6.2% - 4th - This is the first time the Broncos have faced a team with a higher Special Teams DVOA all year. Ranked first through most of the beginning of the year, the Broncos have seen Trindon Holliday struggle of late, dropping their S/T DVOA in the process. The Chiefs dominate average field position, turnovers notwithstanding, so Denver's third unit has their work cut out for them.

From the Outsiders' Perspective, the Chiefs offense is beatable while its defense is to be mildly feared, especially in the red zone. That being said, the Broncos have been on a historic pace. Keeping Peyton Manning upright will be the key to the game, but don't be surprised if the Broncos employ a heavy dose of Knowshon Moreno to offset that Chiefs pass rush and run their way to victory.