I'm going to go ahead and break this series into two parts. This first part will take a look at the things the Denver Broncos can do to neutralize the impact of Tamba Hali and Justin Houston off the edge, as well as Dontari Poe from the middle. Denver will be hoping their offensive linemen can step up and be Teammates of the Week. Later on this afternoon or evening, I will break down some of the Chiefs blitz schemes.

To begin, you have to know what you are up against. Tamba Hali (9), Justin Houston (11), and Dontari Poe (4.5) have combined to produce 68.1% of the Chiefs total sacks on the season. The edge rush and the push from the middle has created a unique dynamic that not all teams can replicate or even slow down. I think Peyton Manning will get hit on Sunday. Whether or not the pressure is consistent and/or effective will depend on what the Denver Broncos do to combat it.

For each of these players, I went back and charted their sacks with a stopwatch. I then averaged everything into a final number. Over the course of Hali's 9 sacks, on average it took him 3 seconds from snap to contact. League wide a good average for getting rid of the ball is anywhere from 2.9-3.2 seconds. But for our purposes we will establish a baseline of 3.0 seconds. Anything beyond that will be considered a coverage sack.

Four of Hali's sacks would count as coverage sacks. Everything else is below 2.8 seconds with his fastest sack being 2.0 seconds on a play where he was unblocked (this was a beautiful scheme which we will look at in the blitz portion of this preview).

Hali is everything you like in an edge rusher. He is quick off the snap, he uses hand placement to gain leverage and keep his frame clear from the opposing linemen. He is powerful, and perhaps most importantly flexible. That dip Von Miller is well known for Hali has as well. Here is a look at one of his sacks: 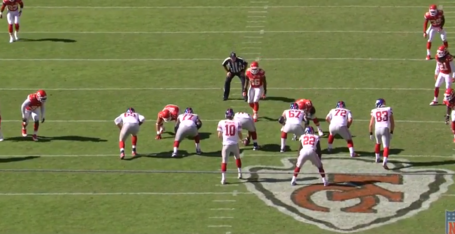 Here he's lined up wide, even a bit wider than a 9-tech. 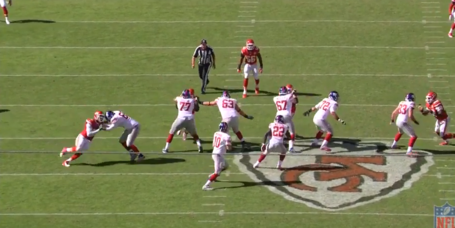 Lining up so wide gives him leverage on the angle to the outside. This is why at this point in time the offensive lineman can only manage to place his hands within his left shoulder. Hali has accomplished both position and leverage and is about to use them to get his hands free and his man off balance. 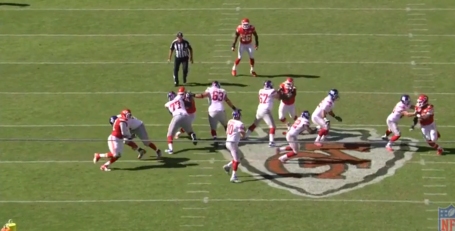 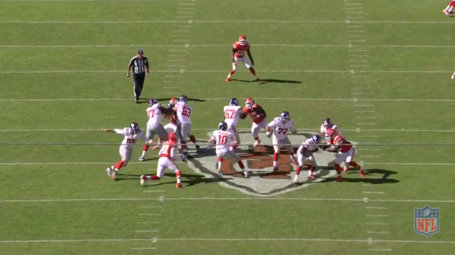 Houston is a bit smaller than Hali in the weight department. He isn't as strong, but he still has good speed and he uses it to build leverage and transfer that into superior strength. One of the ways he does this is to initially rush to the outside only to get the lineman's momentum moving right while he takes his rush back to the inside. I've seen him do this over and over. Here is an example: 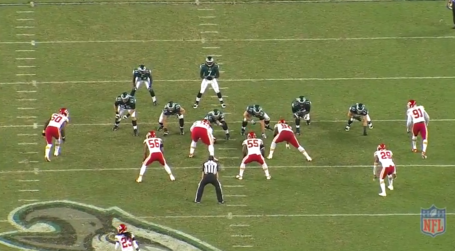 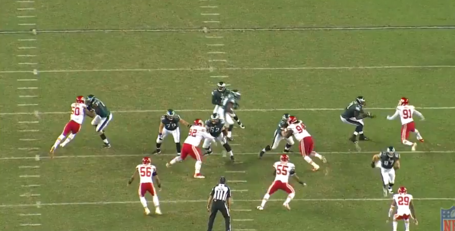 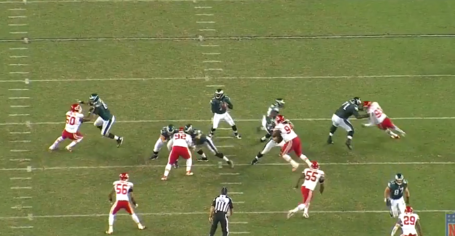 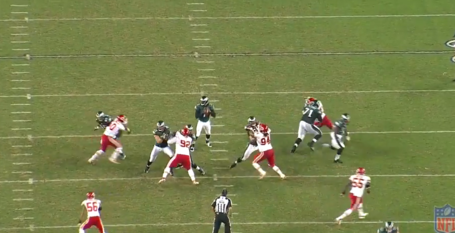 This isn't anything really advanced, one way to limit a larger opponent is to get him moving a different way than you are. Those larger linemen do not have the athleticism to switch directions, reset their base, and re-engage the opponent before that opponent is already past them.

Dontari is starting to learn to use his strength in his favor. Dontari's sacks clock in at 2.9, 3.9, 2.5, 1.7, and 2.4 seconds respectively. Professionally, he is starting to develop a small but effective arsenal of pass rushing moves. Watching him I see a bull rush, a swim move, and a rip move. What has been most effective in dispensing opposing linemen has been that swim move. 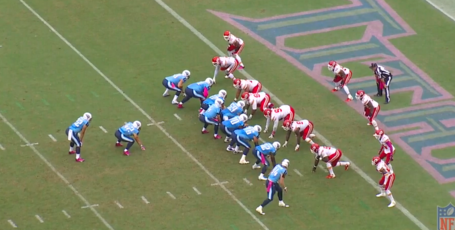 He is actually lined up as a 3 technique here off of the RG in a four point stance. 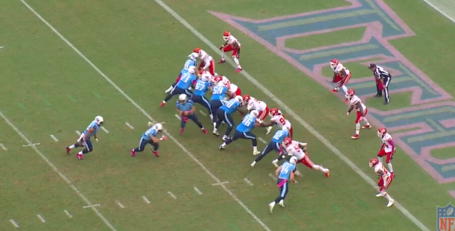 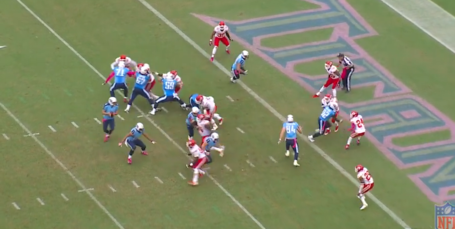 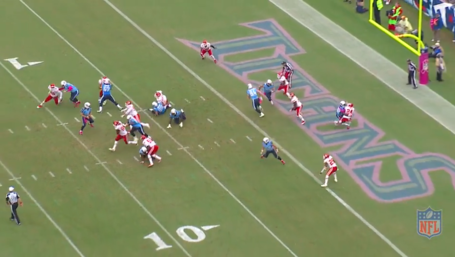 Now as usual, I did some of my own research on this. With stopwatch in hand, I clocked every pass Peyton Manning threw against the Chargers in the 1st half last week (21 total attempts). Peyton averaged 2.23 seconds from snap to release of the the ball. The longest he held the ball was 2.8 seconds. He got the ball off within 2.4 seconds 67% of the time. Why is all of this important (besides the fact that his time to throw is on average faster than the "Big 3's" time to sack)???

Because the last quarterback to give the Chiefs some issues, someone they got to only once, also got the ball off pretty quickly. That would be Jason Campbell of the Cleveland Browns. I looked at that game first and noticed how fast he was getting the ball off. It is what gave me the idea to chart the sacks and Peyton Manning. Unfortunately, I did not chart most of his work, but you could see that coming off of that third step in the drop, he was already in his throwing motion.

I fully expect the Broncos to come out in attack mode and run as fast a paced offense as they can. Get those lineman running play after play with little rest between. Do not substitute and do not give them opportunities to get off the field.

Peyton Manning must not hold onto the ball. He has been fantastic all season, except in a couple of instances. Peyton must trust the clock in his head and once the buzzer goes off, he either throws it to a receiver, or throws it away.

Peyton will have full ability to alter his cadence, mix up the snap counts, and keep the Chiefs line from zeroing in on the timing. They will be eager and this will play to our advantage. Peyton has shown an uncanny ability to draw multiple neutral zone infractions in a single game. He can help settle that pass rush by creating doubt. He does this by changing things up.

Jack Del Rio had a great take on how to limit pass rush:

"If you go bigger, you are pushing more people into the middle of the field," Del Rio said. "I think quarterbacks get hit more often in the bigger packages than they do when things are spread out. I believe that and have always believed that even when we're the ones chasing the quarterbacks."

I don't necessarily agree with it, but running 11 personnel does do a couple of things. It limits the amount of line combinations the Chiefs would use, it keeps the middle of the defense a little less congested and opens up some running lanes to the outside especially with how wide Hali and Houston line up, and it makes potential overload blitzes and secondary blitzes easier to diagnose.

I'm counting on one thing this game, for Franklin to handle his responsibility and to do it will little help. One reason being Peyton can at least see the rush from that side. It is easier for him to sense and step up if Franklin is beaten than it is if Clark is beaten.

You don't even have to sacrifice Julius Thomas in 11 personnel to chip him. Use Moreno in that capacity coming out of the backfield. He helped put Robert Mathis square on the ground against the Colts: 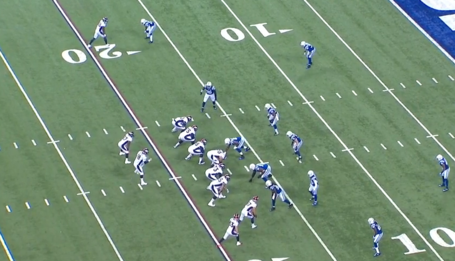 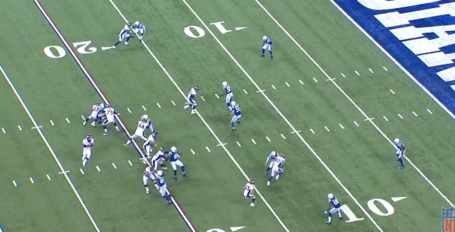 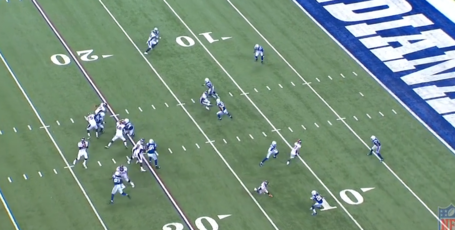 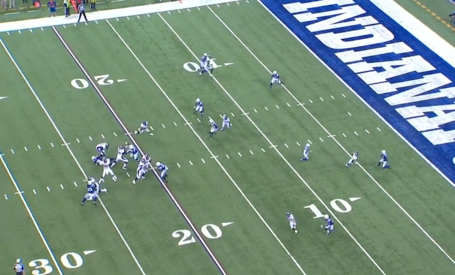 That initial step from both Clark and Franklin must be wide enough and yet controlled enough to maintain balance and provide leverage to route that speed around the backside. Peyton has to know his depth must remain consistent with a 3-step drop whether it be a pass play from under center, pistol, or shotgun. In fact, I would venture to say we will see more of the pistol formation as the geometric proportions are already built in to help with this goal.

One more observation, Peyton has been sacked more than once when he has shuffled to the right side of the formation to buy more time. Moving laterally in the pocket with two edge rushers like this can be suicide. Even if you shift to a vacated area, the speed from the backside pursuit is enough to negate any space you have bought with that move. 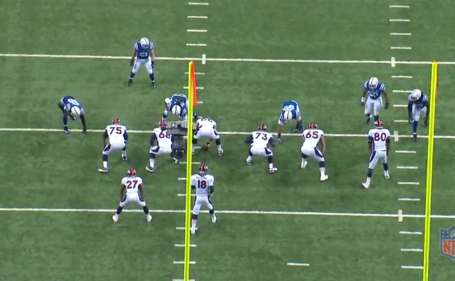 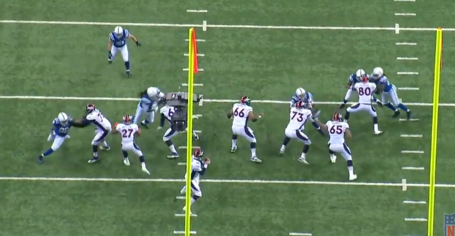 Here if Peyton steps up into the pocket, Mathis will be too wide to affect the play. Instead he moves laterally to the right and directly in his path. 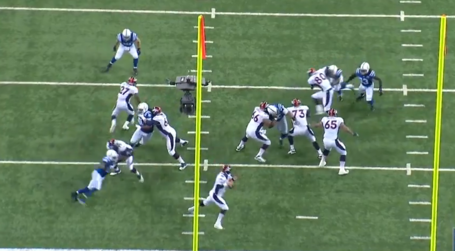 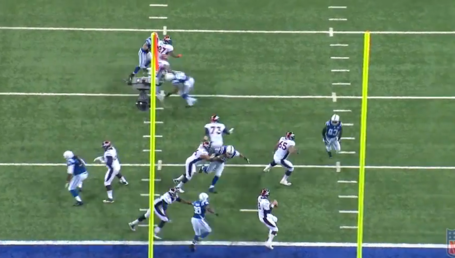 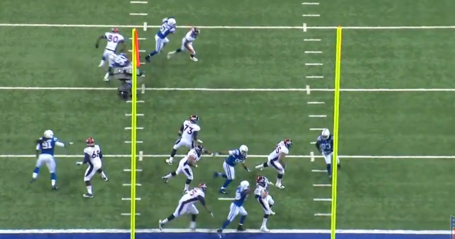 The Chiefs have been good at sniffing them out, but the Broncos have been just as good at executing. Whether it be the quick out to a WR in the flat or a design to the RB, the Broncos must include this tactic in their plan. Take advantage of that aggressiveness.

Pound the rock, win on 1st and 2nd down

Against Buffalo, they allowed 193 yards to Spiller and Jackson on 28 combined carries. They are currently giving up 118 yards per game on the ground and are ripe for Knowshon Moreno and Montee Ball. I wouldn't be surprised to see Broncos run the ball more in this game than they have in the past. Bottom line, you can't hit the quarterback if he hands the ball off.

Furthermore, any early running success would be a huge help to the passing game in playaction. However the Broncos decide to run the ball, whether it be to spread them out in 11 personnel and run against a light box, or get heavy along the front with 2 and 3 TE sets, the running game must get 3-4 yards consistently either on 1st or 2nd down.

If the Broncos leave themselves in 3rd and longs too often, they will be punting the ball more than they are used to.

"Teammates of the Week"

Notice how I didn't mention strategies to take on Dontari Poe? With that potentially disruptive force pushing the pocket back, I have identified both Manny Ramirez, Louis Vasquez, and Zane Beadles as "Teammates of the Week." These three interior linemen should be responsible for double teaming Poe. He may shade to one side or the other, he may play a 3 technique to either side. Wherever he is moved, the Broncos will have a hard time winning that battle one on one consistently.

Sutton is a smart man who will move personnel around to alter the Broncos approach to things. While these suggestions are just a sample of simple things the Broncos could do to neutralize the pass rush, I fully expect both sides to adapt and change throughout the game. I can't wait for that match to play out.

Peyton Manning. We'll see why in our blitz pickups.