Game time for the game of the year! The Kansas City Chiefs (9-0) face the Denver Broncos (8-1) on Sunday Night Football in 2013's biggest game. Here you'll find information on game time, TV schedule, what channel the game is on, how and where you can stream the game online, announcers, odds, and more. Kickoff is set for Sunday November 17th at 6:30 p.m. MT.

The Kansas City Chiefs (9-0) and Denver Broncos (8-1) face one another this week in a divisional battle with more than the usual motivations at stake. This game has implication toward an AFC West title, as well as home field advantage in the playoffs. 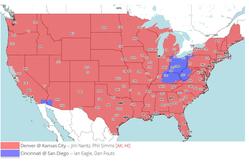 If you're in the red, you're getting the Broncos game this week.

Kansas City and Denver's combined 17-1 records marks the highest winning percentage between two NFL teams in over 40 years. The Chiefs have had two weeks to prepare for this game, upping their anticipation, while the Broncos have had this game circled on their calendars since it was clear how improved the Chiefs are this year.

The Broncos boast the NFL's highest-scoring offense - the Chiefs, its best scoring defense. Peyton Manning is hobbled with an ankle sprain, making the importance of the Broncos protecting him magnified higher. 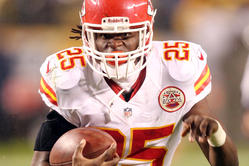 The game has been flexed to NBC's Sunday Night Football featuring Al Michaels and Cris Collinsworth and Michele Tafoya reporting from the sidelines.

NBC offers live streaming of the game in its SNF All Access package. You can listen to games live and online using the NFL's audio streaming package Audio Pass. You can watch the game on-demand after its conclusion using the NFL's Game Rewind package. 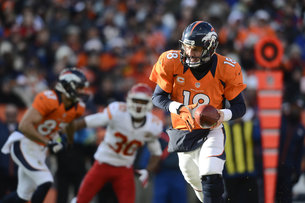 The weather report is that the game could be a cold one, but not too cold. Forecast indicates partly cloudy skies and 41 degrees at kickoff, with a low of 28 expected that evening.

The Broncos are 8.5-point favorites to win against the Chiefs at home.

Read about the Chiefs: Arrowhead Pride 5 Questions with AP 5 Q's with MHR

Defense vs. Offense! Are the Chiefs for real? Make your pick in the poll below.