Happy Gameday Broncos Country! Yesterday we took a look at some things the Broncos could do to neutralize the best individual pass rushers on the Chiefs. Today we're going to look at some of the things the Chiefs like to do when blitzing.

One of the favorite concepts the Chiefs like to run when blitzing is the "overload."  Quite simply, put more rushers to one side of the formation then there are blockers.  You can accomplish many things with this concept.  You can create mismatches or even get guys free passage to the quarterback.  You can limit the amount of passing options a QB has as the RB and perhaps TE have to stay in to protect.

Something the Chiefs like to do with LB Derrick Johnson is to use him as a decoy.  He'll initially look like he is coming to rush but this is done to draw the attention of a blocker who will then be left in no man's land when Johnson bails and there is nobody there.

On this play the Texans are going to line up empty.  Sutton counters with an overload to the left side of the offense.  Poe is lined up as a 0-tech against the center.  From there Sutton stacks both Hali and Houston on the LT and Derrick Johnson looks as if he will be taking on the LG. 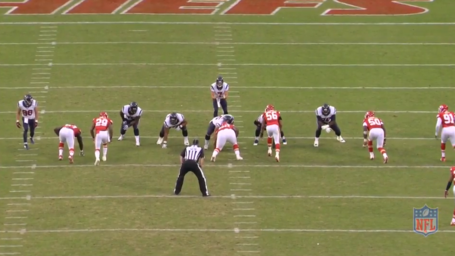 Johnson has occupied his man just enough and will now bail out.  The LT has a tough decision, and he makes the right one.  You take the inner most rusher, which leaves Tamba Hali completely free. 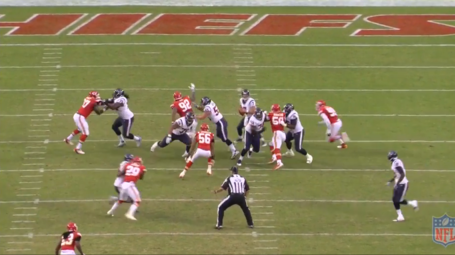 I believe both Poe and Hali get to the quarterback at the same time.  Good design and execution.

Something the Chiefs also like to do is to attack the A gap.  Just like last play they will use a stack.  This time they will add a delayed concept.  Hali comes first to occupy the Center, and Johnson comes a but late free up the middle.  This I would expect to see this evening. 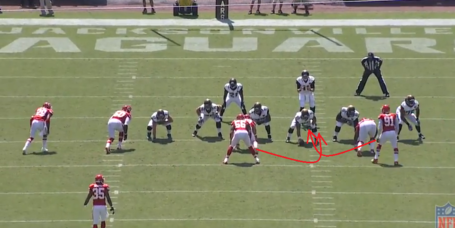 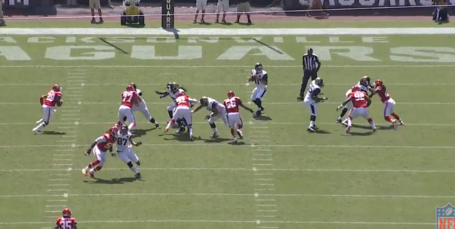 How to stop it

Identify it, set your protection, and get the ball out hot.  One of the draw backs in combating an overload as used by the Chiefs is that they use their front 7.  By design, they are not going to take someone out of coverage to blitz.  While the Chiefs are plenty capable of blitzing a Safety or Corner, I think the gameplan for this game is to leave as many players in coverage as possible.

So while there may be a "hot read" it is not the case of a quarterback simply throwing the ball to a vacated zone.  The good thing for the broncos is that they have been stellar with blitz pickups and protection shifts.  I think I have seen Moreno miss one or maybe two pickups all season.  Even with the overloads, Denver has found a way to get them blocked.  Here are Peyton Manning's numbers when blitzed this season:

That's right, Manning has not been sacked once on a blitz.

Strength vs. Strength it would be wise for Kansas City to try and get their with their front 4.

Then again, if they can force the Broncos into some 3rd and long situations, blitzing becomes more of a possibility.