The Denver Broncos won. It wasn't flashy, it wasn't sexy, it lacked the huge plays or big plays off turnovers - the Broncos just won.

The Denver Broncos took on the AFC West's, the AFC's, and the NFL's top-ranked team Sunday night, and came away victorious. The Kansas City Chiefs never held a lead in the game, and the league's stingiest defense couldn't stifle its most prolific offense. The Denver Broncos took over the top seed in the division and conference with a 27-17 victory over the Chiefs, improving to 9-1.

False start on the first play. The crowd was so intense one could barely hear the ref call the penalty. Great job by Broncos Country showing up and loud and proud. The 3-and-out from the nervous Chiefs was inevitable, and the Chiefs punted.

The Broncos responded with a short drive aided by a decent Trindon Holliday return and a Chiefs defensive holding penalty. The offense didn't get in rhythm early either, and Matt Prater knocked in a 54-point field goal to make it Broncos 3, Chiefs 0.

The Broncos and Chiefs traded punts on subsequent drives. Watching the back-and-forth between Brandon Flowers and Wes Welker was fun, because the exchange was fierce. Flowers leveled Welker downfield on one play when Welker wasn't looking. Then, on a 3rd down, it was Flowers who prevented Welker from breaching the first down line as Welker worked against a tackle for extra yardage.

I fumble, you fumble, everybody fumbles. Then, instead of exchanging punts, the teams exchanged fumbles. Peyton Manning fumbled an exchange with Montee Ball (the QB, not the RB, was credited with the fumble), and Chiefs linebacker Derrick Johnson recovered. Manning himself executed a game-saving tackle on the recovery that Johnson would have taken for a touchdown. A play later, Broncos defenders Danny Trevathan and Quentin Jammer double-teamed Anthony Sherman to force and recover a fumble respectively, and the Broncos got the ball back.

This time the Broncos wasted no time putting points on the board. Peyton Manning hit Demaryius Thomas deep against single coverage for 70 yards to the Chiefs red zone. Then the other Thomas, Julius Thomas, found paydirt from a quick pass on quick slant between three defenders. Broncos 10, Chiefs 0.

With TD, Broncos @Julius_Thomas has tied for the most TD receptions in a season by a TE in club history (@ShannonSharpe, '96, '98).

The back-and-forth continued. The Chiefs kept up with the Broncos through the game's first half.

The Chiefs' next drive was one of their most impressive on offense all season. Down by double digits for the first time all year, no one was sure Alex Smith could open up an offense and produce yards and points when needed. To their credit, the Chiefs answered, with clutch throws to Dwayne Bowe (helped by a little push off and an earlier Duke Ihenacho taunting penalty) to score and make it Chiefs 7, Broncos 10.

The Broncos came right back with an efficient, ten-play, 79-yard drive for a touchdown led by a 20-yard play by Julius Thomas and a 29-yard catch by Demaryius Thomas. Wes Welker moved the chains to set up a Montee Ball one-yard touchdown run. Broncos 17, Chiefs 7.

Three goal-to-go plays, and the Chiefs couldn't punch it in after the Broncos defense stepped up big.

Goal line stand. The Chiefs responded well, particularly with a big 35-yard run by Jamaal Charles. The Chiefs drove down to the two-yard line, and on first and goal, Mike Adams stepped up and stopped Jamaal Charles. Terrance Knighton and Shaun Phillips made the stop on 2nd down, then Steven Johnson made a huge open field tackle at the one-yard line to prevent Jamaal Charles from entering the end zone. Three goal-to-go plays, and the Chiefs couldn't punch it in after the Broncos defense stepped up big. Succop knocked in the chip shot field goal to make it Chiefs 10, Broncos 17.

On the Broncos' last drive, the offense stalled at the KC 35-yard line. Matt Prater missed a 52-yard field goal attempt (his first miss of the season), giving the Chiefs a last-minute attempt for points.

The Broncos went 3-and-out - a rare sight from Denver to go scoreless around halftime. Then Denver forced the Chiefs to punt immediately as well. The next two drives end in punts as well in the Colquitt Bowl. The back-and-forth between the Chifes and Broncos had transcended all levels: the teams exchanged points for points, fumbles for fumbles, and punts for punts.

Finally, on 3rd and 3, the Broncos' offense broke out, with less than four minutes left in the third quarter. Manning hit Decker short past the sticks, but Decker had a lot of room to run, and trucked down 33 yards to the Chiefs red zone. Montee Ball finished the drive with a 13-yard run, and the Broncos took a commanding lead. Broncos 24, Chiefs 10.

The NEW Kansas City Chiefs slogan: "We Haven't Given Up More Than 24 Points In a Game!" Oh, wait, there's another qtr? #broncos #chiefs

Cris Collinsworth unfathomably called the Chiefs' drive that ends in a punt a "win" for KC, down two scores in the fourth quarter. OK, Cris, let's let Peyton Manning show you what a real "winning" drive is. Running the no-huddle again, Manning found Welker twice for 29 yards on the 62-yard drive. Matt Prater knocked in a 36-yard field goal to put the game out of reach. Broncos 27, Chiefs 10. 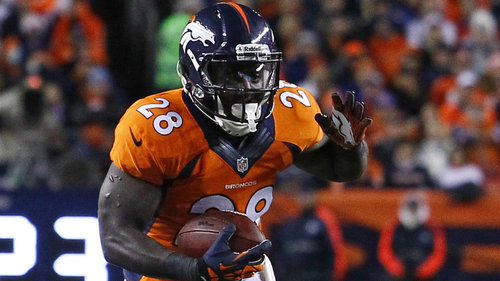 With 7:06 left and the Chiefs down three scores, the game was all but over, but Kansas City kept fighting. The Chiefs responded with a drive that sustained their dwindling hope - a number of big first down conversions (aided by a number of penalties) led to Alex Smith finding Antonhony Fasano in the back of the end zone for touchdown. The Chiefs made it a two-score game. Chiefs 17, Broncos 27.

I picked #Broncos 31, #Chiefs 17. Pretty close, but not as close as @MaseDenver, who was spot-on.