Six thoughts on the Broncos win. On offense, defense, and special teams, the Broncos played well.

Share All sharing options for: Broncos Six-Pack: Reactions on beating the Chiefs

It's been awhile since I crafted a Six-Pack. Pop open and enjoy six thoughts, reactions, and observations from the Broncos' 27-17 win over the Chiefs!

The game went as expected. I had predicted a 31-17 final score, so seeing the final score of 27-17 confirmed my thoughts on the game heading in. That's a rare feat in today's NFL, which is so often full of surprises, that one should pause to enjoy on the predictability of this game. As predicted, the Broncos would be challenged by the up-and-coming Chiefs, but in the end Denver's offense and defense would both out-perform their opposition and give the Broncos a comfortable win. 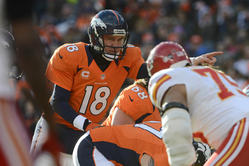 The gameplan was perfect. The Broncos kept the Chiefs off balance the entire game, with a nice balance of runs and passes that kept defenders Justin Houston and Tamba Hali in check. Knowshon Moreno carried a season-high 27 times, with Montee Ball punching in two touchdowns on eight carries. Manning was pedestrian by his standards, but he still had 323 yards - more importantly, he kept Kansas City guessing.

How about that defense? I could write a Six-Pack just about the defense. OK, let me dish out a Sub-Six-Pack quickly.

Shaun Phillips, with 1.5 sacks and a sky-high 10 tackles from the defensive end position, has emerged as a force.

Manning had the play of the game... with a tackle. The fumble was his fault, but Manning made up for it with his touchdown-saving takedown of Derrick Johnson. Johnson would have gone for 6 had Manning not stopped him. With Trevathan and Jammer combining for a fumble turnover a play later, and the Broncos immediately driving for a touchdown of their own, Manning's tackle resulted in a 14-point swing.

Injury bug keeps biting. Has anyone, outside of maybe the Green Bay Packers, been as hard-bit by the injury bug as the Broncos this season? Two of their top four players will have missed most of the season with respective injuries in Champ Bailey and Ryan Clady, while other injuries continue to pile up. It's a statement to how deep and talented this team is - and how much of an impact Peyton Manning has on a team - that the Broncos are able to keep on rolling past the repeated injuries.