It's Peyton Manning vs. Tom Brady for the 14th time this Sunday night, with the 9-1 Broncos favored on the road against the 7-3 Patriots. 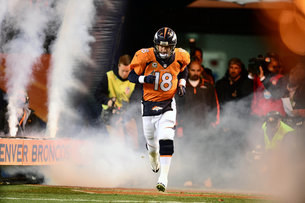 It's Peyton Manning vs. Tom Brady for the 14th time this Sunday night, with the 9-1 Broncos slightly favored on the road against the 7-3 Patriots. It's the second consecutive week for both teams on primetime, and with the Patriots feeling jilted by the refs on the national stage Monday Night, the Broncos better be ready for their best. And their angriest.

TE Rob Gronkowski. The Patriots got their swagger back when they got their Pro Bowl tight end back, and they also got their offense back. In four games on the field, Gronkowski has already contributed 343 receiving yards to the Patriots offense with two touchdowns - both touchdowns and 202 of those yards coming in the last two weeks alone. Gronk is Brady's favorite target, and the only way the Carolina Panthers could manage to slow down the tandem as Brady drove down the field for what would have been the game-winning touchdown Monday was to quite literally hug and hold Gronkowski in the back of the end zone. A legal way of stopping Gronkowski has yet to be found.

CB Aqib Talib. The cornerback got caught jawing and getting physical with WR Steve Smith after whistles had blown Monday and paid the price: an unsportsmanlike conduct penalty that extended a Panthers drive in the red zone and ended in three points. Talib didn't have a performance to back up his antics between the whistles either, as receivers were targeted eight times for six completions and 95 yards by Cam Newton with Talib in coverage. Newton's 42-yard strike to Smith was particularly damning.

Unfinished Business: A Meeting of Legends 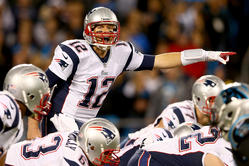 The Denver Broncos vs. themselves. In their Week 5 matchup a year ago, the Broncos lost two fumbles en route to a 31-7 deficit in the middle of the third quarter. Manning would rally to bring the Broncos within striking distance 21-31, but a third and final Willis McGahee fumble at the Patriots' 11-yard line doomed them to the 10-point loss. The Broncos need to play smart, turnover-free football against the Patriots, much like they did against the Chiefs a week ago, and limit their own mistakes.

Tom Brady will find success against a Peyton Manning-led team; he always does. The key will be for the Broncos to find more success against Brady's team. They do that by limiting turnovers on offense.

Stick around Mile High Report all week long for film studies, statistical analyses, and many more in-depth looks at Denver's Week 12 opponent, the New England Patriots. What is your Matchup to Watch?