CBS and a few others have the Denver Broncos #2 in their Power Rankings, but Peyton Manning and company are Top Dogs just about everywhere else around the web in Week 12.

Facing their toughest test of the season, Peyton Manning and the Broncos answered the challenge with a 10-point victory. The Seahawks may be able to capitalize on Manning's deep ball deficiencies, but there's not a lot of hope for everyone else when the league's other elite pass defense still surrendered 8.1 yards per attempt. Denver will still have to do it again in Arrowhead to ensure themselves of a No. 1 seed, but right now it's crystal clear that the road to the Lombardi Trophy runs through Denver.

The Broncos made a statement on Sunday Night Football by leading the game from start to finish. Not only that, they won by double digits against the leagues best defense in football. Peyton Manning and the Broncos biggest test of the season is the next two games, however, so we'll see how that plays out. Homefield advantage is most definitely at stake.

A major key in Denver's win was limiting Kansas City's best threat. Jamaal Charles finished with 72 yards from scrimmage, the first time he failed to reach 96 this season.

They showed against the Chiefs they are the class of the AFC. Now comes another chance to show it against the Patriots. 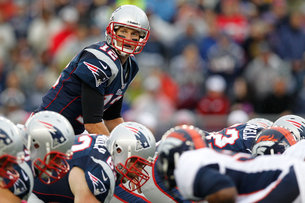 Who's hot? Rob Gronkowski. Who's not? Aqib Talib.

The Broncos answered the first bell with the win over KC, but now face New England before getting KC again. It could be difficult to hold the top spot in the AFC.

(5 first place votes). The AP Pro32 is determined by a simple points system based on how each voter ranks the NFL's 32 teams. A team receives 32 points for each first place vote, 31 for second place and so on through to the 32nd team, which receives one point.

Remember when passing for 300-or-more yards was a big deal? Well, Peyton Manning has done it in nine of 10 games this season.

The Broncos are the clear No. 1 team at this point, thanks in no small part to their offensive line. Talk about stepping up to the plate: Not only was Peyton Manning able to step up in the pocket Sunday night, it seemed like he barely had to move against the best pass rush in the league. The Chiefs came to Denver with 36 sacks and left Denver with 36 sacks.

Thank the seven gods I don't have to go through another week with Kansas City fans telling me that there's no difference between the Broncos and Chiefs because they've had similar schedules. I feel like if I had to endure this for another month, I would've suffered a brain aneurysm.

Are the Broncos your Top Dogs? Where do you have them ranked?