The importance of playing until the final whistle.

Jim Saccomano, the Vice-President of Corporate Communications for the Denver Broncos (and the Broncos' resident history expert) recently pointed out via twitter how the Broncos have become something of a national team thus far this season.

I have experienced this phenomenon first hand with the Water Cooler Quarterbacks. Nearly every football discussion includes a rather lengthy look at the Broncos. And no, I am not the one who usually brings our beloved Orange and Blue up in the conversation -- at least, not always . . . not even a majority of the time.

One of the recent points of discussion has been about the rather interesting change in how the Broncos have approached the game. During the Shanahan years, the attitude seemed to be one of "Score early, score often then hold on to win." Since the arrival of Peyton Manning, the attitude has seemed to shift to one of "Start balanced, study the defense, then surge higher as the game goes on." This view was raised by the scoring pattern of the Broncos this season. Denver has scored 70 points in the first quarter, 97 in the second, 107 in the third and 118 in the fourth. That fourth quarter surge is very intriguing, given that the Broncos have held a lead entering the fourth quarter in seven of their nine games. That lead has been by an average of twelve points.

Manning vs. Brady: By the numbers 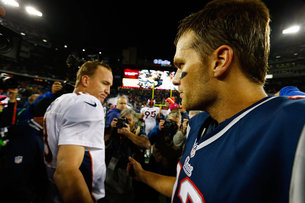 This fourth quarter surge, especially the 31-point fourth quarter explosion by Denver against Washington, led the group into talking about how teams finish games. For the sake of not burying everyone in statistics, we decided to focus upon the four AFC West teams. The basic question being: How have those four teams closed out games?

The way we chose to answer this question was to tally data regarding each team's drives in the fourth quarter of each game. We looked at:

We tallied the same information for each of the team's opponents. It is important to note that we chose to not include those drives which began in the third quarter but ended in the fourth. As a result, the scores in our tally and the time of possession may not match what shows up in a standard box score. It should also be noted, that we chose to treat turning the ball over on downs as a take away even though "official" NFL stats do not include them in the Take Away/Give Away ratio. The thought was when Team A denies Team B a first down on fourth-and-whatever, it is as good as a fumble or interception since two things have occurred: (a)Team B has been denied points and (b)Team A has not been backed up by a punt.

Here is what we found.

The Broncos are currently 9-1-0 and in 1st place in the AFC West. They have held a lead entering the fourth quarter in eight of their ten games with an average lead of 12.5 points. The two times they trailed were against Indianapolis where they were behind 17-33 before ultimately losing 33-39 and against Washington where they trailed 14-21 before going on to defeat the Redskins 45-21. Here is the breakdown for Denver and its opponents in the fourth quarter:

What is interesting here is that while drives, plays and yards are all roughly equivalent for the Broncos and their opponents, Denver has scored on sixteen of their thirty-two drives (50.0%) while the opposing team has scored just eight times in thirty-two drives (25.0%). They had just two games in which they did not have any offensive points scored on a fourth quarter drive (Oakland, San Diego) while three teams (Philadelphia, Jacksonville, Washington) failed to score points off any drive begun in the fourth. Another factor is that the Broncos have fifteen take aways against just five give aways in the fourth quarter. The final factor is found in the fact that Denver has been almost 20% more effective in converting third downs than its opposition. This means that the offense has been better able to sustain drives in order to either score, or run out the clock, as the situation warrants.

The Chiefs have run fewer plays in the fourth quarter than their opponents but hold a large edge in time of possession and a slight edge in yards. Kansas City has scored on ten of its thirty-three drives (30.3%) as opposed to its opponents who have scored just three times in thirty-two drives (9.4%). In fact, Kansas City has had just two games (Dallas, Houston) where they did not score offensive points on a drive begun in the fourth quarter, while their defense has held opposing teams without any offensive points from drives begun in the fourth quarter in seven games (Jacksonville, New York Giants, Tennessee, Oakland, Houston, Cleveland, Buffalo). The Chiefs have fifteen take aways against just three give aways in the fourth quarter. Kansas City's defense has dominated which has given the offense a better opportunity to control the game, despite a relatively narrow edge in third down conversion percentages.

The Raiders, despite an edge in fourth quarter time of possession, are behind in plays, yards and have been outscored by a margin of 10-to-4 in drives. Oakland has scored on four of thirty-two drives (12.5%) while allowing opponents to score on ten of thirty-three drives (30.3%). The Raiders have had six games (Indianapolis, Washington, Kansas City, Pittsburgh, New York Giants, Houston) where they did not score any offensive points on drives begun in the fourth quarter. They held their opponents to no points on drives begun in the fourth quarter in two games (Denver, Philadelphia). Perhaps even more damaging for the Raiders than the lack of scoring drives is the fact that they have given the ball away eleven times (34.4% of their drives) -- almost three times as many as their drives that led to scores. The fact that Oakland has only taken the ball away five times has not helped. A final factor can be found in the fact that the Raiders have not done a particularly good job of converting third downs and have trailed their opponents in that category.

The fourth quarter has been a struggle for the Chargers. They trail their opponents in drives, time of possession, plays and yards. They have been outscored nine times to seven on drives. The Chargers have had four games (Houston, Tennessee, Jacksonville, Miami) where they did not score any points on a drive begun in the fourth quarter, while denying opposing teams points on a drive started in the fourth quarter three times (Dallas, Jacksonville, Denver). San Diego has punted on nearly half of their fourth quarter drives and when give aways are added to the punt total, 65.5% of the Chargers fourth quarter drives have ended in either a punt or a give away. In comparison, their opponents have scored on 30.0% of their drives but have allowed San Diego to take the ball away five times.

Another way of looking at the fourth quarter can help us reach an even clearer picture of how strongly these teams have finished games. Five stats leapt out at us over the rest:

*points scored by the offense on drives begun in the fourth quarter
** all points scored in the fourth quarter (offense, defense, special teams and drives begun in the third quarter)
*** scoring on a 3rd down play was considered to be a successful conversion; kneel downs to end the game were not included
**** drives used to run out the clock and secure the win

What stands out in the table above is that Denver and Kansas City have finished games in a strong fashion. They have outscored their opponents in the fourth quarter -- despite rarely trailing in that quarter. They have done a better job converting third downs than their opponents to keep drives alive and control the flow of the game. They have won the turnover battle. They have found themselves in a position to run out the clock -- and been able to do so -- on a consistent basis. San Diego has outscored their opponents but been less successful in converting third downs to keep drives moving and have broken even in the turnover battle. The Raiders have struggled in all of these areas and are only in front of the Chargers by virtue of a 27-17 victory over San Diego in Week 5.

What the Water Cooler Quarterbacks took away from this was the importance of not only playing consistent football throughout the game, but the focus -- exemplified by the Broncos this year -- on playing better as the game wears on. In other words, do not score early then hope that you can hold on to win. Score, then keep finding ways to score more right up to the final whistle.

The Water Cooler Quarterbacks wish you a great week of football.