Hello folks! I'm excited to bring you a new series that should be exclusive to Bronco Mike and Mile High Report. From now until the end of the season, I am going to chart each passing attempt, snip the formation, and diagram what went on with the play both offensively and defensively. My goal here is to have a deeper understanding of the Manning passing game. Simple right?

This is my system completely. The nomenclature you see here is something I've decided on and was chosen for one main reason: I want to have a consistent model in order to explain and understand my own research.

I have attached a certain letter to a specific player. These will not change, regardless of where that receiver lines up. I do not care if Demaryius Thomas is lined up in the slot or as a split end.

Y = The TE (usually Julius Thomas) When there is more than one TE, every TE will be marked as "Y"

RB = whoever the back is

If there is a substitution (say Bubba Caldwell), he will be labeled according to the player he is replacing. Remember, I'm keeping it uniform so the information is simple to understand.

When you see these numbers under "alignment" it means if I were reading the offensive formation from LEFT TO RIGHT, there would be 1 receiver split to the left, and two receivers split to the right. Immediately after these numbers will be the specific alignment.

What about the TE? Unless the TE is split wide, he will not be labeled in the alignment. You would have to go back and reference my screen shots in order to know where he lined up on a given play.

But this sounds so confusing!!!

Guess what? Each and every pass will have a corresponding pre-snap picture-diagram. On these I will identify the one on one matchups (red box), blitzers (red arrows--when necessary), folks who are in "zone coverage" (white circles to designate their zone, or white lines/arrows to designate where they dropped to, and yellow arrows to designate the route being ran by a specific player. Sometimes I will use other colored boxes to make it easier to see the man to man matchups that are more difficult to see because of presnap alignments.

If you're not sure how to interpret something, or if you don't understand a specific concept or my explanations--just ask for clarification.

When it comes to identifying the route concepts, until I have a better grasp on things, I will try and label what I think is the primary read for that play. 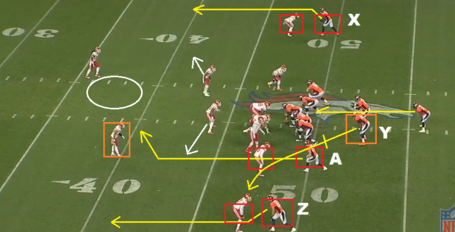 Both Decker (Z) and D. Thomas (X) are running go routes with Welker (A) running a post from the slot. Julius (Y) will check first for protection and then run to the flat as an outlet. Knowshon will go through the middle of the KC line and squat short in the middle of the field. Standard Cover 1 or "Man Free" with press on the primary WR's. Both ILBs will drop into a zone as marked. The 2nd safety (orange) eyes the flat as his responsibility. This is what looks to be a middle screen to the RB. The throw was incomplete. 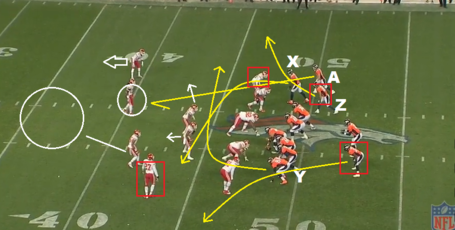 Here we have a bunch or trips to the right. Decker is the inside man, DT is the middle man, and Welker is on the outside. Julius is lined up to the left of Chris Clark. There is basically only one man to man matchup with most of everyone else playing zone. Even the safety to the bottom (27) seems to be keying the flat more than the RB even though I mark this as a man to man matchup. Both Julius and Demaryius are going to run crossers that essentially act as a natural pick play as the linebackers to each side will naturally drift into each other's zones as they pass on their man. This is not the primary read however. Decker in the flat is where Manning looks from the get go. He comes back to Demaryius for the 6 yard gain. From what I can see, Welker's route serves to put him into position in case the throw goes to the crosser going to the right. If the ball goes there, he has the potential to hold a block on the safety and spring open a big play. 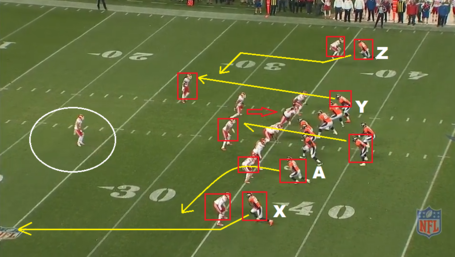 Again straight up Cover 1 with press on the WR's and off man coverage on Julius from the safety. When Julius ups his football IQ, I could see this being an option route down the line. Given the design to that side for Decker to run a deep dig, a 5-10 yard out would all but guarantee a first down with the potential for a big play. The RILB is going to blitz leaving Johnson alone in the middle to cover the RB. At the bottom, Demaryius is going to clear out that side with a go route and Welker is the target going into the flat. 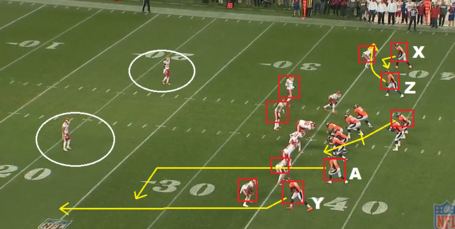 This time the Chiefs are in Cover 2 Man Under. Just means the two safeties will split deep responsibilities and each take half of the field while the other cover guys man up. Forget the routes on the bottom and even the release from the RB after checking the protection. Peyton sees the off coverage on Decker (Z) and want's to try and spring a big play with a WR screen to Thomas (X). The only problem is Thomas' man gets a hand on him and keeps him from releasing cleanly. Timing is thrown off and the pass is incomplete.

This is a jumbled mess and the first time we see a "robber concept." When I say "robber 1" the coverage is still Cover 1 or man free with a single deep safety. The difference being the low safety has the freedom to read the play and help where necessary. Here, once he sees there is no run, he sits in a shallow zone to protect the middle of the field. Hali on the bottom is going to drop in zone to the flat, and each ILB has man responsibility. We finally have a two TE formation with Julius on the outside. Virgil is in pass protection first, and release as an outlet receiver once that 1st responsibility is taken care of. Peyton targets Demaryius on a curl which is a poor read. Julius over the middle or the RB to the flat are better options. 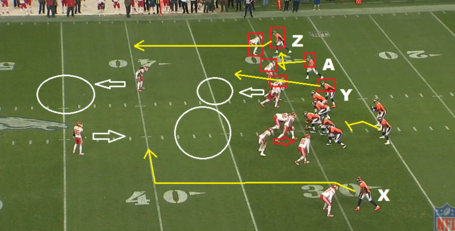 Another Robber 1 situation with a zone blitz mixed in. The key on this play is for Julius and Eric to clear out right flat with their "go" routes so Wes Welker is wide open on his in/out pivot route. The design works perfectly, what keeps it going for a first down is Julius' man opens up to a trail position and is able to see the pick design in the flat. He comes off of Julius and makes the tackle on Welker. Nice play by him. 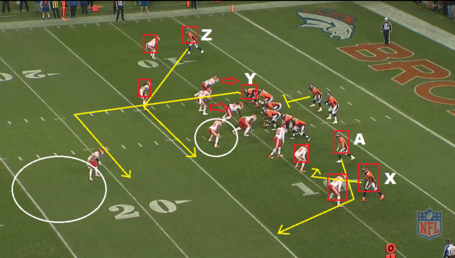 We have a double dig from the right side of the formation, more Cover 1 and an overload blitz to the right. This is one of those designed pick plays. Demaryius (X) is going to come straight across bringing his defender and creating traffic for Welker's defender. Welker (A) runs a wheel route. Flowers stays with Wes beautifully and Peyton beats the coverage with a back shoulder throw. Well done by Peyton. 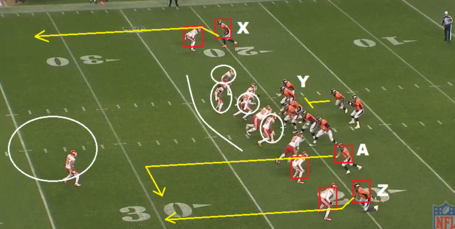 Whatever the Chiefs do in the 2nd meeting, they better not show Peyton this look again. Initially it looks like an All-Out blitz. The Chiefs will only bring 3, they have four of their short defenders drop into an umbrella zone within 5-6 yards of the LOS. This leaves one on ones on the outside with the single safety in position to help with Welker or even Decker. Because of the safeties' proximity to Thomas on the other side, Peyton knows his one and only read is Demaryius one on one at the top of the screen. Cooper barely gets a hand on him, Thomas releases clean to the outside and has a stride on him very early. This play went for 70. 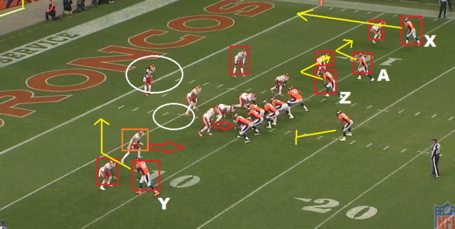 This one goes for a TD. "Man Free," the double outs from Decker (Z) and Welker (A) will both be open, but Peyton reads the blitz and single high safety to Julius' side (Y). Peyton makes a beautiful throw between the zone LB and the blitzer to connect with Julius on the quick slant. It is a beautiful thing to see a big man like Julius run such a gorgeous slant pattern in the redzone. By my count, this same concept has scored 3 touchdowns to date.

Well there you go folks--this was a lot of fun to do and I plan on having the 2nd quarter ready for you tomorrow. I originally thought I would break these into halves, but there is simply too much information here for one post. If you notice anything I missed please let me know--we all get smarter with the best information regardless of where it comes from.

Going forward, it might be a bit much to expect quarterly breakdowns for each game, but I will definitely prepare at least one or two of these per week.