Broncos vs. Patriots: Five Questions with the Enemy

Questions answered by the New England Patriots experts over at Pats Pulpit.

Share All sharing options for: Broncos vs. Patriots: Five Questions with the Enemy

1. Aqib Talib has been a real bright spot on the Patriots defense since he's arrived in New England. What are the chances he plays on Sunday?

Talib is currently practicing "day-to-day", but odds are very good that they'll have him play. The Patriots #2 cornerback, Alfonzo Dennard, has been declared out for the game, and there's no way the Patriots will face Denver with their top two corners off the field. He'll absolutely be injured (his hip was re-aggravated late in the game against the Panthers, forcing him to sit out), and he wasn't able to get himself back into his pre-injury shutdown mode, but he'll play. The question is more how the Patriots will utilize him, instead of whether or not they'll play him. 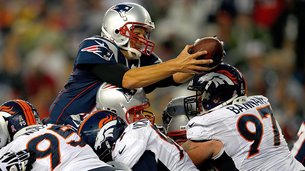 He's shown that he's not healthy enough right now to shadow the opposing #1 corner in the fashion that gained him his current reputation. I believe that it could be in the Patriots best interest to have Talib follow Eric Decker around, and double up coverage on Demaryius Thomas with a cornerback and safety help. Of course, that coverage will be the Patriots #3 cornerback (Kyle Arrington, who pulled his groin against the Panthers, but had to play because they had no one else) and free safety Devin McCourty (who has become one of the top safeties in the league).

Will it work? Who knows. But having Talib out on the field is a must, and his match-up will have to fit his health.

2. Tom Brady is always Tom Brady, but he's had some pretty down games this year. Stats are just gloried numbers, but what's the deal with the statistical drop this season?

The spare parts? Rookie second round pick Aaron Dobson, who has emerged into a solid second target, but who suffered from a major case of dropped passes early in the season. Rookie undrafted free agent Kenbrell Thompkins, who was playing as a #1 target with Gronkowski and Amendola out, also suffered from drops and actually found himself as a healthy scratch before the bye week. Veteran Julian Edelman, who actually was valuable and we can't really complain about.

Brady's top four receivers are in the bottom 25 of league with regards to drop rate.

It was mostly, but not entirely, the rookies. Brady's top four receivers are in the bottom 25 of league with regards to drop rate (out of 92 qualifiers). Edelman (25th, 11.9%), Dobson (3rd, 20.5%), Thompkins (15th, 13.8%), and Amendola (9th, 14.7%) haven't helped out Brady at all [numbers per Pro Football Focus]. The offensive scheme crumbled without a viable receiving option at tight end, which prevented the Patriots from stretching the linebacker and safety coverage up the field, opening lanes for the slot receiver underneath. And then there's Brady. His accuracy has absolutely been off and he's been throwing behind his receivers on a his typical bread-and-butter out routes. His touch has been off when throwing down the field. He's been off-target on his back-shoulder throws. Some of that is adjusting to new receivers, some is just Brady looking terrible. He's looked a lot better with Gronkowski on the field, though, so perhaps the Brady we saw in the first half of the season is gone for good.

3. What part about this New England team worries you the most?

Injuries on defense are the easy answer. They're missing both starting defensive tackles for the rest of the season (Vince Wilfork, Tommy Kelly). They're missing a starting linebacker (Jerod Mayo). Wilfork and Mayo were the only defensive captains, and are both All Pro players, and the Patriots actually had to select new captains to replace them. Then there are the part time injuries, to Dennard, to Talib, to Arrington (the starting three cornerbacks) to starting safety Steve Gregory.

That's seven of the starting eleven. The only four to escape injury are the starting defensive ends Chandler Jones and Rob Ninkovich, linebacker Dont'a Hightower, and safety McCourty. Of course, McCourty and Ninkovich were named captains, so you have to knock on wood to avoid them getting injured with the way things are going.

But that's the easy and obvious answer.

Outside of that, I'm most concerned with the play of the Patriots interior offensive line. All Pro guard Logan Mankins has been extraordinarily inconsistent in pass protection as his communication with center Ryan Wendell has been pretty shaky. Same with Wendell and right guard Dan Connolly. Connolly has historically been the weakest link on the line, but he, Wendell, and Mankins are all reasons for when the Patriots offense struggles.

They're fine while run blocking, but in pass protection they leave much to be desired. Pressure up the middle ruins Brady's rhythm so improvement from the interior unit is a must.

4. What has been the biggest surprise this year for the Patriots?

The fact that they're 7-3. If you told any Pats fan at the end of last season that they'd go the first 10 games and would be missing their starting (and these players are all All Pro) tight end, right tackle, nose tackle, and linebacker (who calls the plays), as well as their Pro Bowl (however much a sham it is) cornerback and defensive tackle for extensive periods of time, they'd call you crazy.

If you said the Patriots wouldn't have their top receivers from last year, they'd roll their eyes and call you overreacting. Add in the Hernandez thing, and they'd laugh. If you said that all the above would happen, and they'd be 7-3 and a chance for a first round bye? I'd take that every day of the week and twice on Sunday.

Maybe we didn't expect to lose to the Bengals or Panthers or Jets. But beating the Falcons at their house, and then beating the Saints? I'd call the season "exciting" and "better than expected."

With all the adversity the Patriots have faced (some bad luck, some self-afflicted), the fact they're still not just in contention, but one of the favorites in the conference makes this one of Belichick's best coaching jobs ever.

5. If you could take any player from the Broncos and put him in a Patriot uniform on Sunday, who would it be?

Great question. Orange Julius would be amazing to see paired up with Rob Gronkowski. DT is also a dominant #1 receiver. Vintage Champ would be nice as well. That said, there's only one answer for the Patriots current team.

Von Miller would be outrageous to have. Miller is the unquestioned best at his position and can do it all. He is an elite pass rusher and he's extremely sturdy against the run. The Patriot linebackers are known to be oversized and a step slow when asked to move laterally so adding a player of Miller's skillset would benefit the team dramatically.

Big thanks again to Pats Pulpit for taking the time to answer these questions!