The Denver Broncos suffered a slew of injuries in the frigid conditions of Gilette Stadium Sunday night, with Dominique Rodgers-Cromartie and Knowshon Moreno headlining the injury list.

Share All sharing options for: Knowshon Moreno injury: Broncos running back in crutches after Patriots game

In 2013, if there is a game when Peyton Manning falters, Knowshon Moreno usually ascends.

That was certainly the case Sunday night, as the Denver Broncos running back rushed for a career-high 227 yards on 37 carries in Denver's 31-34 overtime loss to the Patriots, It makes the news of his injury all the more damning - Moreno, who hobbled off and on the field frequently late in the loss, was seen in crutches in the locker room following the game.

Moreno was seen in a walking boot after the game, according to reports.

Moreno suffered an ankle injury in overtime, according to The Denver Post. ESPN reports that he is expected to undergo an MRI.

The Broncos' defense changed in the second half, and the halftime exit of Dominique Rodgers-Cromartie is one clear reason why. Denver's starting cornerback suffered a freak shoulder injury on the last play of the second half when trying to come up with a Tom Brady Hail Mary. DRC would not return. 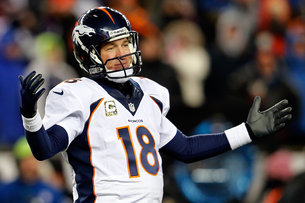 He is expected to get an MRI, according to ESPN.

Starting defensive tackle Kevin Vickerson suffered a right hip injury in the second half and did not return. He'll also be undergoing an MRI - wondering if these three Broncos will be hanging out in the same waiting room before their tests?

Broncos special teamer and defensive back Omar Bolden suffered a concussion, according to Jack Del Rio after the game. He'll follow NFL protocol requiring him to be cleared to practice and play by an independent neurologist before he'll return to the field.