There are many Broncos/Chiefs games worth talking about. The Monday Night Meltdown, the Atwater hit on the Nigerian Nightmare or the classic Montana/Elway duel. However, the game that mattered the most was the one that ultimately led to a Title.

For me, the biggest matchup in Denver Broncos and Kansas City Chiefs rivalry history took place on January 4, 1998 in the only playoff meeting between the two teams. And what a battle it was!

Broncos @ Chiefs; Through The Years 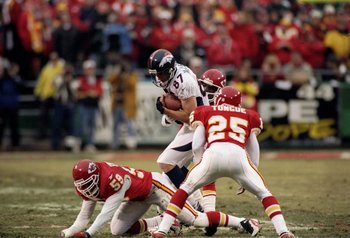 A look at the greatest win at Arrowhead Stadium in Denver Broncos history.

Why is this game significant to me? Because it's one of the only Broncos games I didn't get to watch. I had just started my first over-the-counter job at your friendly local Jack in the Box. I attempted to request the day off and tried to work out a schedule change, but everyone pretty much told me to piss off.

I swallowed my pride and went to work that day. I ended up finding out from a customer that the Broncos had won 14-10, so I immediately went to my manager to ask for the following Sunday off. Again I was told no, and there ended my three month stint with Jack in the Box. Fortunately, I never looked back either. Much like the Broncos, I was on to bigger and better things.

That game, though, ended up being one of my favorite types of games. A defensive slugfest. John Elway and the Broncos were sloppy, fumbling the ball four times and losing two of them. Without Terrell Davis, they would have gone home that day and the Pittsburgh Steelers likely would have gone to the Super Bowl that year. Marty Schottenheimer was the coach of the Chiefs after all.

It wasn't until many years later on YouTube (an early YouTube) that I actually got to watch the game in its entirety, but all that's left now that I could find was this gem of the final moments of that great football game.

The Chiefs are not a bad football team, but they are clearly not as good as their 9-2 record indicated.

The Broncos have a catastrophic record at Arrowhead during the month of December in their 53 year history, but they are 1-0 in January. It certainly appears as though these two AFC West rivals could be on a collision course for their second head to head matchup in the playoffs this season.

The Chiefs are not a bad football team, but they are clearly not as good as their 9-2 record indicated. And though I love a good defensive battle, that's the kind of football the Chiefs need in order to have a chance, so Peyton Manning and the Broncos need to come out and put up three touchdowns before halftime to make sure that doesn't even have a chance of happening.

What was your memory of this game?