Five Predictions? Five Bold Predictions? Bah, everyone has those. I charted down 20 different angles that predictions can stem from, then pulled them out of a hat in order to make my sure-to-be-right predictions about them.

Share All sharing options for: Five Random Predictions For This Weekend's Broncos-Chiefs Game

Full Disclosure, I apparently can't count to Five and pulled out Six instead... oops!
So I opened up the first 4 I drew. Then the 5th and 6th were opened. "Defensive Struggle" and "Final Score" were the two. Bye Bye Defensive Struggle only because we all LOVE to see a final score prediction, so here we go. Buckle in tight folks because you're about to go down the Rabbit Hole with me! 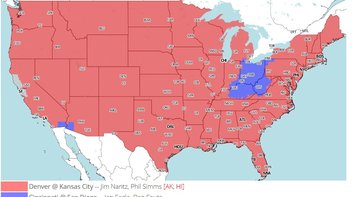 If you're in the red, you will get the Broncos game this weekend.

Von Miller: My boy Von had easily his best showing last week. I think he is finally rounding into football shape because he seemed to have more fuel in his tank and looked to be faster and stronger than the previous few weeks. That is good because this week he will have not 1, not 2, but 3 sacks! Yes, 3 sacks! See, Alex Smith and the KC Chiefs did what I predicted they would do two weeks ago, and that is "find a more explosive offense against the Broncos, do well at it, and then convince themselves that they can keep it up the rest of the year, thus making them a very difficult team to beat the second time we play them."

Well, they did very good against us two weeks ago, and then last week they actually looked like a very good offense against the Chargers. Will that translate well against the Broncos? It SHOULD, but it wont. See, Smith is going to want to go vertical again which means he'll have to hold onto the ball longer; In comes Von Miller. Von won't give him the time he needs to pick our secondary apart. Von will get QB pressures, no doubt, but he will also get his 3 sacks because Smith likes to scramble a lot, and he will fortunately scramble right into Miller's waiting arms. Don't worry Alex, when he hits you, it'll only hurt for a second.

#1 Offense: Here we go Broncos fans, time to get our offense back on track. Can we do that against a statistically great defense? Hell to the Yeah we will!!! Sorry KC fans, but it isn't going to be 14° Sunday afternoon. Cold weather seems to be Manning's only kryptonite, so it looks to be a particularly painful day for the Chiefs' defense come December 1st. Our play action (yep, we'll do some of it) will be particularly potent this week because as Adam Gase said, we established that we can run the ball. KC will have to semi-sell out to stop the run which will be a mistake because Manning is the QB back there that they'll be daring to beat them. The training wheels will have to come off this week because Del Rio knows that this will be the last glimpse that other teams (including college) have of him being a head coach. Because of this, he'll want to make sure that our record setting offense gets back on track. It's been over a month since the Broncos really laid it on someone, so this Sunday is as good a time as any to prove once again that we are the undisputed #1 offense in the league. Look out NFL, here we come!!!

Secondary Health: Man, we've been ravished by injuries lately. Not only is Champ hobbled, but DRC went out last week to a bum shoulder. As if that weren't bad enough, Rahim Moore is out with his and limb threatening disease, and Duke had his brain scrambled by Woodyard last week. The next time the Broncos leave the field without a major health setback will be their first time! Fear not though, for Champ looks to be back (whether that's good or not has yet to be seen), and DRC appears to be back as well. Duke will be in there and so will Adams, so although we have been ravished by injuries, at least it looks like we'll have a good group of players back there. My concerns remain with Champ because he looked like he lost about 5 steps against Jacksonville, and he didn't exactly have a great training camp before he did get hurt initially. But for this prediction, I predict that our secondary will be mostly healthy come Sunday and they'll leave that way. 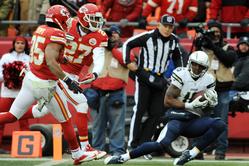 Fumbles: E-Gads, we fumble a lot!!! If it isn't Peyton Manning fumbling a few times a game, it's Manning forgetting how to hand the ball off to our RBs, or laying our RBs out to die as they get crushed the moment they secure the ball off ill-advised dumpoff passes. However you slice it, the Broncos fumble way too much. But good news guys, I predict ZERO FUMBLES this Sunday. I know, I know, I shouldn't be smoking crack while I write these, but you gotta do what you gotta do sometimes. haha. Anyways, I think that Montee Ball won't fumble because he won't be left out to dry on a dumpoff pass and have a defender smack the ball with his helmet the microsecond Ball establishes possession. I think that Hillman won't be in the game which means we won't have to deal with his fumbles either. About the only person I'm worried about is Holiday, but he too won't have fumblitis. This is the week that our RBs and Holiday hold onto the ball. FINALLY!!!!

The Final Score: How do I see this game shaking out? I see the Broncos offense finally getting back into gear and scoring into the 40's. Manning is pissed, Knowshon and Montee are pissed, Welker and DT are pissed, and our coaching staff is pissed. Nothing says "we're gonna destroy you" quite like a pissed off Manning led offense! On the defensive side, I see Miller having a great game and our secondary shutting out Smith. Sprinkle in the fact that we have an elite level run stopping front seven, and I see this game getting out of hand quickly.