This week, in a special edition of our Denver Broncos 2013 Power Rankings Around the Web, we go around SB Nation's collection of NFL blogs to aggregate the most biased power rankings possible. Where do the teams that hate us, rank us, in their power rankings?

The Broncos gained ground by standing still this week, as none of the contenders below them put on the kind of show that would knock them out of the top spot. It remains to be seen whether coach John Fox's absence will impact their play, but the Manning-led offense is a pretty self-contained organism while Champ Bailey's Week 10 return should help elevate the defense. Get well soon, coach.

Hopefully John Fox has a speedy recovery, but in the meantime we have Jack Del Rio's experience to guide the Broncos through this period of the season. The biggest four game stretch of the regular season begins next week for the Broncos as they travel to San Diego to take on a division rival. Then they host the Chiefs in Denver and then hit the road again to face Tom Brady in Foxborough and the Chiefs again at Arrowhead. The goal here for Peyton Manning and company is to finish this four game stretch at least 3-1. 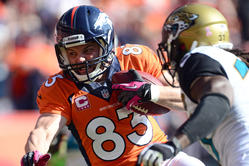 Peruse our archive of weekly NFL and Broncos power rankings. Go back each week and see how the Broncos look throughout the 2013 season!

A week off gives Peyton Manning more time to prepare for the next few games, ones that a division title may hang on. For almost any other team, the loss of John Fox may have greater ramifications, but Manning is a coach on the field so Denver will be OK.

Hopefully John Fox gets healthy, but Manning will handle calling the plays on offense I am sure.

Bye week. John Fox will miss four to six weeks due to a medical issue so Jack Del Rio has been named interim head coach.

When you have one loss on the year, and you actually lose ground on the division leaders during your bye week, it's a strange year.

Behind the Steel Curtain (Steelers) - 3

The Broncos are enjoying their bye this weekend, and all the talk in Denver is about the Week 11 game against the Chiefs. Only problem with that is they have to travel to San Diego for their Week 10 game first.