We look at the Smarter Stats of Football Outsiders each week to gauge the efficiency of Denver's upcoming opponent. Recall that in FO, a negative DVOA is good on defense, bad on offense and special teams.

21.4% - 3rd - Mike McCoy has certainly had the positive effect on Philip Rivers and the Chargers offense that San Diego had to have been hoping for when they hired him. Now McCoy will face his fellow 2012 Broncos coordinator Jack Del Rio, in an interesting matchup of John Fox's #2's from a year ago. 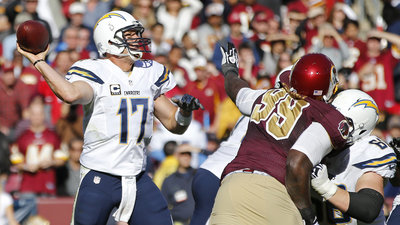 Rivers is enjoying the second-highest passing DVOA and QBR in the NFL -- both second only to Peyton Manning, which matches their sky-high 54.9% DVOA in passing offense. Meanwhile both the Chargers and Broncos are near-bottom of the list in passing defense - Denver is ranked 21st while San Diego is ranked 31st. Points will be scored.

22.2% - 32nd - The Chargers defense is for the taking. Their pass defense is ranked 31st; their rush defense is ranked 31st. Whether through the air or on the ground, the Broncos should have no trouble moving the football against San Diego.  Their overall regular ratings (not efficiency ratings, just in terms of yardage) still put them in the bottom third of the league in both categories. However, in scoring defense they rank a decent 11th, which suggests they are a bend-but-don't-break unit that the Broncos will have to overcome in the red zone.

From the Outsiders' Perspective, the San Diego Chargers are a beatable defense, but this is not an important point -- the Broncos are able to beat any defense. The real concern is the Chargers offense, and the fact that they are capable of putting up more points than anyone the Broncos have faced to date.

Just consider the Dallas Cowboys, who the Broncos had to score 51 points to beat in early October. They are currently ranked 12th in offensive DVOA. If Denver's defense plays like that against the 2nd-ranked Chargers, Peyton Manning and company might have to put up 60 points to beat San Diego.