A collection of quotes from Denver Broncos players and coaches on San Diego Chargers week.

Jack Del Rio on familiarity with the San Diego Chargers:

"We're getting ready for San Diego. Our guys understand San Diego. [Head Coach] Mike McCoy is a guy that worked here (as offensive coordinator). We're familiar with them; they're familiar with us. Looking forward to the opportunity to go in there and compete; it's a divisional opponent. It will be a big opponent for us. Offensively, they've done some nice things, they're No. 1 in the league in 10-play drives, they have 20 of them on the year. They're second in third-down percentage, which helps on those long drives. They're not allowing sacks on third there. They're averaging over 400 yards a game. Special teams, second in holding field position. And defensively, no pass touchdowns [allowed] over the past three weeks. And I think fourth in points[allowed] over the last three weeks. So it's a good team, it's a division game, and all of our attention is on getting prepared for them." 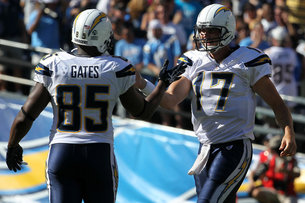 Jack Del Rio on any advantage Mike McCoy has coming from Denver:

"Obviously divisional opponents know each other well and then you add in their head coach was formerly our offensive coordinator, so he does have that. I think we both know a lot about each other. I think from that standpoint it's a little bit of a wash. Certainly we have a lot of respect for what he's doing there now, and the challenges that are in front of us."

"Mike was great for me. I just can't tell you how indebted and grateful I am for the support Mike gave me. He and I spent a lot of time together. We kind of put together a hybrid offense last year-a combination of some of the Colts stuff, some of Mike's stuff, some of, I guess, [Patriots Offensive Coordinator/Quarterbacks Coach] Josh McDaniels' New England stuff. It was really a hybrid last year. It was pretty rare for the offensive success we had in that short period of time when you are putting an offense together and have new quarterback and a coordinator working together for the first time, it doesn't work that well, that often. So it's a real credit to Mike for making it work and being the leader of our offense last year. He was great for me on Sundays, talking in my ear, great for me talking situations out here on the practice field, on the sidelines during games. I'm very, very indebted to him and certainly happy-not surprised-that he's a head coach. He deserves the opportunity."

Never count him out. Every time you look up, he's always having 300, 400-yard passing [games]. -Rahim Moore on Philip Rivers

"Never count him out. Every time you look up, he's always having 300, 400-yard passing [games]. His quarterback rating is 106.5-that's outstanding. So he's getting better and it's showing on film."

Shaun Phillips on getting to hit former teammate Philip Rivers:

"Yeah. Me and Philip go way back to the Senior Bowl. We played against each other in the Senior Bowl and we were jawing back and forth. I think I hit him one play and the next play he threw a pass and he jawed back at me. So it's just all out of friendly competition in football and I'm pretty sure I'm going to get a hit or two on him and I'm pretty sure he's looking to make a play or two on me. It'll be a little bit of jawing back and forth but all out of love because I admire Philip and I think he's a great person and a great player."

Shaun Phillips on his emotions on Sunday:

"Honestly, it's business as usual. I'm in a great situation right now so there's nothing for me to be emotional or complain or upset or overzealous or too happy about. I'm happy I get to go play football. It's going to be fun to go back and again, it's the competition against you're old teammates that you're looking for. So it's going to more excitement than anything."