Game time! It's been a long two weeks since the Denver Broncos last tasted victory, but they are well rested following their bye and ready for the San Diego Chargers this Sunday. Kickoff is set for 2:25 p.m. MT.

San Diego Chargers head coach Mike McCoy and Denver Broncos interim head coach Jack Del Rio served as offensive and defensive coordinator respectively for the Broncos in 2012. Now these former colleagues will face one another as head coaches in Week 10.

The Broncos and Chargers boast two of the best offenses in the NFL in 2013, so strap in and get ready. There will be fireworks in San Diego November 10th. 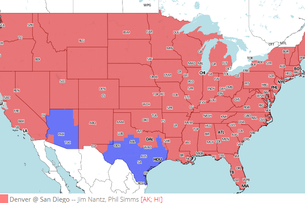 CBS will air the game nationally, with Jim Nantz (play-by-play) and Phil Simms (color commentary) calling the game. In Denver, that's KCNC-TV CBS 4. Those outside of Denver, check your local CBS listings.

The Broncos are 7-point favorites to win against the Chargers on the road.

Philip Rivers vs. Peyton Manning. Who comes out on top? Let us know in the poll and comments.