When the Broncos win, the MHR Staff gives out game balls! Here's Mile High Report's staff awards for Denver's 51-28 victory over the Tennessee Titans. Just like the records that were broken Sunday, there are a lot of them.

I get it, he's a 'just a kicker', but with the 64-yard field goal at the end of the first half against the Titans, Matt Prater became uniquely special. Since 1970, Tom Dempsey's straight-on 63-yard kick made him an NFL immortal. He was the mark of greatness that many had aspired to surpass. Now that Prater holds the all time distance record for a successful field goal, his is the new mark of greatness. A mark that will push kickers to strive for greatness. Hopefully for many years to come. Prepare yourselves, Broncos fans, gone will be the grainy footage of Dempsey's kick and make way for Matt Prater, Denver Bronco, NFL record holder. Not bad... for a kicker. - Jess Place 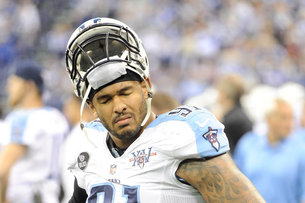 Two of Denver's key positions on the offensive line - left tackle and center - are both products of the depth chart, necessities that have come out of injuries to Ryan Clady and J.D. Walton. Yet these two replacement players, Chris Clark and Manny Ramirez, neither with any prior NFL game experience at their position, have excelled as protectors of Peyton Manning and road-graders for Knowshon Moreno and Montee Ball. Louis Vasquez and Orlando Franklin locked down the right side, while Zane Beadles is Pro Bowl bound. This offensive line has been stellar, even without its best player, and while a lot of that is due to Peyton Manning's exceptional ability to get the football out of his hand quickly, a bigger part of that is due to the exceptional play of Clark et al. Kudos to them for keeping this offense on its historic pace. - Monty

"Whoever wrote that narrative can shove that one where the sun don't shine," Peyton Manning said just after the game on Denver's 850 KOA in response to Dave Logan asking if he had a response to critics who said that he couldn't play in cold weather. After the team went down 21-10 Manning set his sites on the goal line and answered back with 24 unanswered points. The Titans reared back just once more and Manning boosted another 17 to put the game away. Peyton finished the game 39/59 (a record amount of attempts for him) putting up 397 yards and four touchdowns. Those four touchdowns put him at 45 on the season-- five away from Tom Brady's record of 50, with three games left in the season.

Manning's currently tied at fifth in history with the Green Bay Packers Aaron Rodgers with 45 touchdowns in a season, Rodgers pulled off 45 in 2011. There remains little doubt to who will be the NFL's 2013 Most Valuable Player, as Yahoo's Frank Schwab puts it, the debate may be whether or not Manning is the greatest MVP of all time. - Ian Henson

On a night when the defense struggled at times, it was good to see Von looking like his old self out there.

Von Miller was solid today. His finished the game with 3 tackles, 1 sack and 1 forced fumble. Von also tipped a pass that lead to a interception by big Terrance Knighton. Von was accountable for two turnovers. Winning the turnover battle is huge. On a night when the defense struggled at times, it was good to see Von looking like his old self out there. - Scotty Payne

Montee Ball is really starting to look like a starting running back in this league. He is protecting the football and making some impressive runs in between the tackles. Apparently, the doghouse was not a pleasant experience and he has taken that and used it as fuel. Peyton Manning appeared to want to show all of his detractors that he can indeed play well in the cold, so we didn't see much from the running game. Even so, Ball averaged over five yards per carry and came up big in the passing game - even with a horrible drop in the first half. Overall, this guy is coming along quite nicely for a rookie. - Tim Lynch

Knowshon Moreno had his 7th 100+ total yard game as a running back, something only topped by Jamaal Charles, Matt Forte, Adrian Peterson and LeSean McCoy this season. He averaged 5.6 yards per carry and had the longest run of the day of 25 yards and the longest reception of the backs with 13 yards. He added 31 yards receiving as well. While he was clearly slowed last week because of his injury he showed his speed off by breaking two runs of 20 yards or longer and only had one run go for 0 yards or less. Oh and he was his usually self as a pass blocker. This guy deserves to be talked about as one of the productive backs in the NFL and with the numbers he's putting up, also deserves a Pro Bowl nod. - Topher Doll 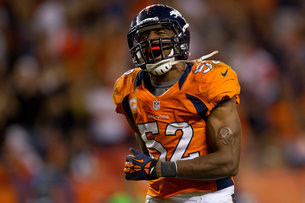 Malik Jackson might not be a household name in the NFL, but if he continues to progress as he has -- he certainly will be. Jackson has seen an increase in his snaps at DE and DT with Derek Wolfe and Kevin Vickerson sidelined and he has performed very well. Today's performance brought in four solo tackles, three for loss and a sack that was nearly a safety on Ryan Fitzpatrick. In a part-time role, Jackson has quietly accumulated 30 tackles and five sacks. Look forward for him to continue producing at a high level down the final stretch. - Christopher Hart

It was just a couple of weeks back that there were some complaints about Eric Decker's ability to play against physical defensive backs. After two dominant games and many embarrassed DBs later, that seems like forever ago. Fans wanted to see Decker play like he was in a contract year, and now that's just what were getting. Eighteen receptions for 291 yards and 5 touchdowns in the past two games for Mr. Decker. If he keeps this performance up, this may not be the last time we see a fifty-burger on the scoreboard.

As a patron of that cold weather game, I had the fortune of sitting two rows back on the twenty yard line, right next to the replay booth. This was precisely where Eric Decker was trying to "persuade" Scott Green that his long ball was indeed a touchdown. Scott Green disagreed, and Decker let him know his opinion on that quite verbally. If only I had a boom stick, that would have been one great conversation to hear. - Mr. East