Terrell Davis on the value of a late season, quality loss

Back in training camp in August, I had the opportunity to speak with Broncos Ring of Famer Terrell Davis. One comment he said resonated with me, and I'd like to share it now.

Share All sharing options for: Terrell Davis on the value of a late season, quality loss

Most fans are still reeling following the Denver Broncos' 20-27 loss to the San Diego Chargers Thursday night. In the past few days, I have read comment after comment; I have witnessed first hand the woeful, depressed attitude of Mile High Country; I have felt the apocalypse nigh on the 2013 season.

The tweets and emails and comments have all been similar: 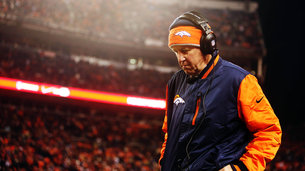 "How can a team that is thought to be a Super Bowl contender lose so easily at home?"

"How are we supposed to advance in the playoffs with this defense?"

"If Manning has a bad game in the playoffs, we're through."

While all of those items are concerning, I have another point of view. The sky isn't falling for me, even if I have joked about it in the past few days.

This loss gives me hope. And it's all because of the words of Terrell Davis.

I had the opportunity to talk with the Broncos Ring of Famer during my trip to Broncos training camp this August, as he was visiting as an analyst for the NFL Network. Davis was gracious enough to give this blogger and other beat writers several minutes of his time, and I took the opportunity to ask him about his experiences through the 1996, 1997 and 1998 seasons. He said some very interesting comments in those 15 minutes, but one comment in particular resonated with me. One comment I stashed away, saving it for a week exactly like this.

The question was basically, "Why do you think the Broncos lost in January last year?" His answer: They hadn't lost since October.

"Last year just felt like (the Broncos) were winning games too easily, and I always felt that there's something to be said about a quality loss," Davis said. "People underestimate that loss late in November or December. Not to say that you go out there and try to lose a game, but it's a chance for the team to refocus, recalibrate, look at the things that you've been sweeping under the rug because you've been winning games so many times."

"Last year just felt like (the Broncos) were winning games too easily.... People underestimate that loss late in November or December."- Terrell Davis

Denver's experience last year certainly lends credence to Davis' claim. The Broncos won 11 straight games heading into the 2012 playoffs. They had beaten every one of those teams by a touchdown or more. They were the top seed in the AFC. They had home field advantage throughout the playoffs. They earned a bye week.

They lost in their first playoff game in double overtime.

Perhaps what was missing from that 2012 season's formula was a loss in December.

"I remember we didn't have a Monday practice for 14 games," Davis continued, talking about the 1998 season, and how the team only met on Mondays following a loss. "It was a long stretch. And when we finally had our meeting, we went through things that we were deficient in. (Before) it was, ‘Hey man, we won it, so who cares about that?' And that's what happens when teams go on these long runs; they just don't look at some of the details because they've won those games.

"When you lose, you come here on Monday, you go through a lot of film, you come back on Wednesday, more film," said Davis. "You get a chance to really look at some of the things that you didn't do so well and why you lost the game.

"Denver didn't have their chance late in the season; they were just rolling out wins. And they really weren't close games, either."

The season is not over, Broncos fans. Far from it. If Denver's December loss to San Diego becomes a learning experience, and an opportunity for the team to refocus their efforts, then this frustration you and the players feel now will have borne fire come January. And maybe February.

It may all be worth it in the end.