Manning is only the eighth Pro Football player to win Sports Illustrated's Sportsman of the Year award. It's pretty special that someone as competitive, classy, and - yes - sportsmanlike is a player for the Denver Broncos.

Share All sharing options for: Peyton Manning named SI Sportsman of the Year

The slate of awards that are sure to follow Denver Broncos quarterback Peyton Manning's historic 2013 season has begun, as Manning has been named Sports Illustrated's 2013 Sportsman of the Year. 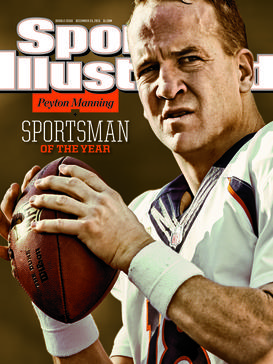 SI's Sportsman of the Year issue is on sale now (click to enlarge).

"At first, when I knew we were considering Manning, I thought: good choice. Lifetime-achievement-award choice," says SI Senior Writer and NFL guru Peter King. "But if you isolate this year, you're looking at a player two years removed from four neck procedures that would have prompted many 35-year-old legends to choose retirement. He has his Super Bowl. He has his MVPs. Now he's on the verge of breaking the most important single-season quarterback records (touchdown passes and passing yards) in the 94-year history of the game. He threw seven touchdown passes against the defending Super Bowl champs. And he's got his team set to win the top seed in the AFC. Who plays his best-wounded, with so many great young guns chasing him-at 37?"

Previous SI Sportsmen of the Year

Congratulations to Peyton Manning for his first award! Let's hope League MVP -- and Super Bowl MVP -- are not far behind!