Whether it was the Houston Texans, the AFC West division, or NFL passing records - everything in Peyton Manning's way went down Sunday in Houston.

It's hard to imagine a better outcome to Sunday's early games for the Denver Broncos. 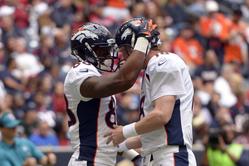 Those four touchdowns broke the NFL record for touchdown passes in a season for Manning, who now has 51.

Then, minutes before Denver's game ended, the Kansas City Chiefs fell to the Indianapolis Colts, giving the Broncos the AFC West division title. It is Denver's third AFC West championship in three years.

Manning had nearly 296 yards by halftime, and finished with 400 passing yards and four touchdowns with no interceptions for a 113.2 passer rating.

For awhile, things were looking close as the Texans clawed back.

The third quarter was another disappointing affair for the Broncos, who have struggled in third quarters of late. Manning and the offense repeatedly went three and out, while the defense struggled to get off the field. The Texans were able to score their only touchdown against Denver's defense in the third quarter.

But in the fourth quarter, only up 16-13, the Broncos exploded with offensive yards and points. Manning hit Eric Decker and Julius Thomas for touchdowns - including the record-breaker - to give the Broncos 21 unanswered points and a 37-13 lead they would not relent. Those scores were aided by interceptions by Mike Adams (a ridiculous highlight-reel sideline grab) and Dominique Rodgers-Cromartie.

One negative to come from Denver's victory, however, is the injury report. Linebacker Von Miller suffered a knee injury in the first quarter and was ruled out soon thereafter. According to the Denver Post, Miller will undergo tests Monday. Backup center Steve Vallos suffered a concussion in the game as well, knocking him out of the contest.

The Broncos can clinch the AFC's first seed and home field advantage in the playoffs if the New England Patriots lose to the Baltimore Ravens Sunday.