All week I kept asking "why fear the Texans?". For about three and a half quarters, they validated those fears, but it was only a matter of time before the cream rose to the top. 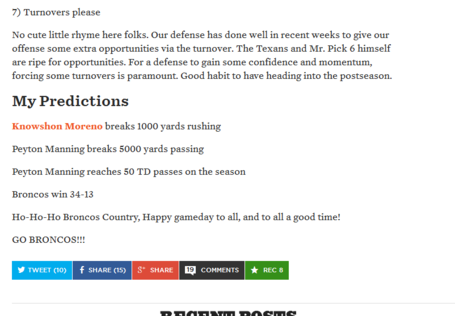 Take a victory lap Bronco Mike--you were about spot on today;)

Champ Bailey covering the slot receiver.  This was a good way to ease Champ back into action.  No heavy lifting against a receiver like Andre Johnson.  Limit snaps, limit exposure, let him knock some rust off against lesser competition, the game is a success.

Pops Mike Adams making a spectacular athletic play on a sideline interception that completely shifted the momentum and complexion of the game.

Chris Harris making plays against multiple receivers in multiple roles.  Still don't like him covering Andre Johnson though, too big a target for him.

Sylvester Williams creating some penetration in the run game, and getting pressure in the passing game.  The rookie logged his 2nd career sack today.

Robert Ayers strip sacking Schaub, even in limited action he just gets it done.

Nate Irving and Danny Trevathan layin' the wood on those outlet passes to the flat.

Louis Vasquez and Orlando Franklin teaming up to hold Watt without a sack.

The defense finally held an opponent to less than 15 points, 1st time all season.

Knowshon Moreno is one of the hardest runners after contact, he become the first Bronco in team history to rush for 1000 yards and receive for 500 yards in the same season.  And Chiefs fans were screaming for Jamal Charles and his 1800 yards for MVP...pfff

You know who is the MVP though right?  Peyton MF Manning.  This is the single greatest season I have seen from an individual player.

Montee Ball continues to run hard with limited action.  His pad level is getting lower and lower by the week, love it!

Decker and Demaryius, 18 receptions for 254 yards and 3 TD's.  Decker's two scores means he becomes the 5th Bronco this season to score at least 10 touchdowns.  That is another NFL record folks.

Julius Thomas is beast, a mismatch inside and outside.  How beautiful was that corner fade on the record breaker?

Liked the aggressiveness on 4th down early on.

Jack Del Rio re-inserting Bolden in the game and playing soft zone.  Cost us a touchdown.

Omar Bolden getting lost in zone coverage and giving up our only touchdown.  The only acceptable use for him on defense is as a blitzer.  LEAVE HIM OUT OF THE GAME, DUKE IS BETTER

Look, about this zone thing.  Every week one of our players screws up their assignment, either because they don't understand, or can't adjust on the fly.  Every week it costs us points or a big play.  KNOCK IT OFF DEL RIO.

For that matter, what's with all the blitzing?  It worked a couple of times, but for the most part ended up vacating areas that left receivers wide open.  There's no need for that when you front is bringing the pressure.

Trindon Holliday muffing another punt.  If I were the Broncos, I'd seriously think about cutting him at this point.  He has brought absolutely nothing to the table as far as returns since early in the season and has not business being back there.  I'll take sure hands and 5 yards everytime over a potential TD OR more likely fumble.

What was with all the penalties OL?  I mean, I can understand holding, tough front.  But false starts and lazy penalties that cost us yardage?  Sooooo undisciplined.

The Broncos got pass happy (understandably so given their success) but forgot about the running game that was doing well.  Texans started teeing off and blitzing knocking Manning on his ass several times.  Once they got back to it---shock, WE MOVED THE BALL, AND THE PASS STARTED WORKING AGAIN!!!

I love you Ed Hoculi, and you will always be special in Broncos Country for screwing the Chargers and for being the ref during our 1st SB victory, but that roughing penalty on DRC's hit was bullshit.  As a matter of fact, so was that non-call on Schaub's fumble.  THE TUCK RULE NO LONGER EXISTS (unless you're Brady I'm sure).

2/11 on 3rd downs probably won't get it done in the playoffs.

Those were the only things that made me see red, other than Von Miller getting hurt.  I sure hope he's ok.

On paper the Broncos have nothing else to play for really.  They have clinched a 1st round bye, and have set all the records that were important to set.  Well, the Broncos need 18 points to break the single season scoring record.  Against the Raiders, I'm confident we could play Brock and achieve that.

Scratch that.  At current count, the Patsies are curbstomping Flaccid Joe and the Ratbirds 17-0, so we might actually have to play for home-field advantage next week.  If that's the case, Manning needs 266 passing yards to break Drew Brees' single season record.

Enjoy this win Broncos Country, it was one for the record books!