Game time! The Denver Broncos will host the AFC's lowest remaining seed in the playoffs at 4:40 p.m. EST on Sunday, January 12th, 2014, the NFL announced.

A year after losing in the playoffs on January 12th, the Denver Broncos will look to reverse their fortunes in the 2013-14 NFL playoffs. Their opponent is to be determined, but many of the facts surrounding the game have been announced. We break it down. 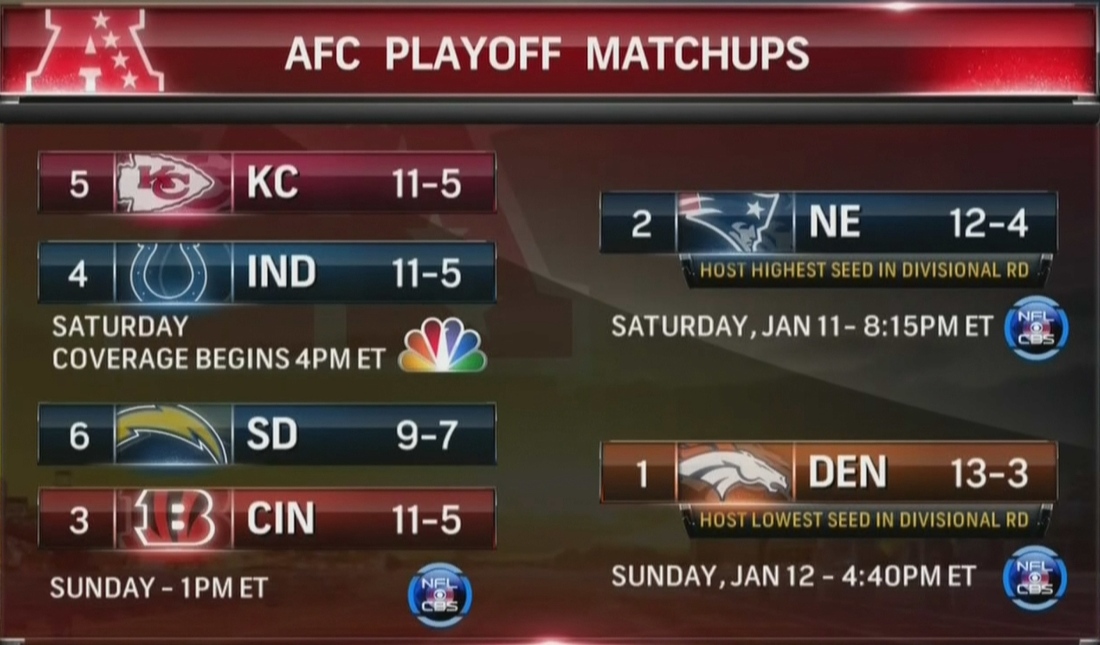 The game will be played at Sports Authority Field at Mile High in Denver, Colorado.

The Broncos game will air on CBS. Announcers have not yet been... erm. announced.

Tickets go on sale Tuesday, December 31 at 10:00 a.m. MT on Ticketmaster.com and will sell out extremely quickly. Ticket prices range from $65-$210 for reserved seats and $250-$425 for club seats with a four-ticket limit. After that, you're left in the resale market, where prices will skyrocket. Don't sell your tickets to anyone but Broncos fans!

The NFL announced the game times for the wildcard and divisional rounds of the 2014 NFL playoffs.

The Broncos will play one of the Indianapolis Colts, Kansas City Chiefs, or San Diego Chargers in the divisional round, depending on the results of those match-ups. Chiefs at Colts will air on NBC at 4:45 p.m. on Saturday, January 4th. Chargers at Bengals will air on CBS on Sunday, January 5th. View the complete NFL playoff schedule here.

On that same date a year ago, January 12th, the Broncos also played their home divisional playoff game - a double overtime loss to the Baltimore Ravens. Hopefully their luck turns around in 2014.

Should the Broncos win their divisional playoff game, they would host the AFC Championship Game on Sunday, January 19, 2014 at 3:00 p.m. EST (1:00 p.m. Mile High time). That game would be aired by CBS.

Keep it locked at Mile High Report throughout the 2013-14 NFL playoffs for breakdowns, analysis, and commentary from the best Denver Broncos community on the web! Let us know if you're going to the game in the comments!