It was a record-breaking year for Peyton Manning and the Denver Broncos in 2013.

Share All sharing options for: All the records Peyton Manning and the Denver Broncos broke in 2013

Denver's 76 touchdowns beat the previous record of 75, also held by the 2007 Patriots.

Players with 10 or more touchdowns

The Broncos converted 293 first downs through the air in 2013, with a small handful coming from QB Brock Osweiler in backup work. The previous record was 280 set by the Saints in 2011.

Pat Bowlen has 305 wins in his 30 years as the Broncos owner. He is the first owner in NFL History to win at least 300 games in his first 30 years of ownership.

The Broncos had three such games in 2013, tying the NFL record that has remained untied since 1969.

Points in 2nd half 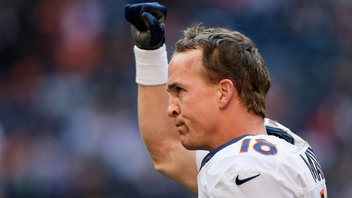 Peyton Manning will win his 5th MVP for his amazing 2013 season. Here's a timeline of his accomplishments:

Manning threw for 5,477 yards, one yard more than Drew Brees threw in 2011, the previous record. After some controversy, the NFL confirmed on January 1, 2014 that the record will stand.

Matt Prater booted a 64-yard field goal in Week 14 to break the long-standing NFL record of longest field goal. That record was previously held by Jason Elam, among others.

Peyton Manning destroyed this record with nine such games this season. The previous record was six, set by Dan Marino in 1984 and tied by Manning in 2004.

Manning tied the record set by Dan Marino in 1984 with four 400-yard passing games this season.

Manning had 15 such games in 2013, tying the NFL record he set in 2004.  Stretching back into 2012, Manning decimated the record for most consecutive 90+ passer rating games in the regular season with 23.

Points in a game

The Broncos scored 52 points against the Eagles in Week 4, breaking a franchise record that had stood for 50 years.

Most points in a quarter

Everything we know about the Denver Broncos' 2013-2014 NFL playoff berth, including game time and possible opponents for their Divisional Round game January 12th.

Peyton Manning threw four touchdowns in the first half, and the Denver Broncos went on to defeat the Oakland Raiders 34-14 and clinch the AFC's #1 seed.

Touchdowns by a tight end, season

Julius Thomas hauled in 12 touchdowns on the season, breaking Shannon Sharpe's franchise record of 10 touchdowns in a season for a tight end. Thomas broke the record in Week 14 against the Titans.

Against the Kansas City Chiefs in Arrowhead, Eric Decker became the only receiver in Broncos history to catch four touchdowns in a game. Previously, in 2000, Shannon Sharpe logged the 12th game in which a receiver caught 3 touchdowns in a single game.

Demaryius Thomas tied the franchise record for most receiving touchdowns in a season with 14. The mark was set by Anthony Miller in 1995.

Right guard Louis Vasquez played in every offensive snap for the Broncos in 2013 and did not surrender a sack. The last player to do that was tackle Ryan Clady in 2008. Vasquez played in 78 more snaps than Clady did then, breaking the record for snaps without allowing a sack in a season (though the challenge is on for Vasquez in 2014 -Clady would extend that streak several games into 2009).

Running back Knowshon Moreno became the first player in franchise history to gain over 1,000 yards rushing and 500 yards receiving.

Peyton Manning set the franchise mark for most completions in a single season with 450.

Manning also set the franchise mark for most attempts in a single season with 659.

Manning has thrown 21 interceptions over the course of 1242 attempts giving him an interception percentage of 1.69 besting the mark of 1.8 set by Hugh Millen in 1994-95).

Most consecutive games with a TD pass

Manning has played 33 games as a Bronco and has thrown a touchdown pass in every single one of them. Brian Griese held the previous mark with 23 consecutive games with a touchdown pass.

Matt Prater set the record for highest field goal percentage in Broncos team history. By making 25/26 kicks, Prater made 96.2% of his kicks.

Prater was in a logjam tie with five kicks made from 50+ yards when he broke the tie and booted a 54-yarder. That also made him 6/7 from 50 and beyond which sit a new high mark for conversion percentage (85.7%).

With a two-year mark of 26-7 (.788), Peyton Manning surpassed Jake Plummer (39-15) as the franchise leader in winning percentage by a starting quarterback.

Manning threw the ball 59 times against the Tennessee Titans tying the franchise mark set by John Elway in 1993.

Big thanks to Bronco Mike for helping me compile this list. Big thanks to our readers and commenters for adding more to this list! Let us know if we missed any 2013 Broncos records in the comments!