Share All sharing options for: Could the NFL take Peyton Manning’s single season yardage record away?

Every week, the Elias Sports Bureau takes a look at every NFL game and alters all kinds of stats. Well, as discussed in the FanShots yesterday, there's a chance that when they review the Broncos 34-14 win over the Oakland Raiders, that they may alter the stats where Manning's single season passing yard record may be in danger.

The play in questions comes with 1:28 left in the first quarter. The Broncos are up 14-0 on the Raiders, and are at mid field. Manning throws a screen pass to Decker, and he takes it 7 yards up field. However, the gif below shows that Manning actually threw a backwards pass to Decker which would make it a lateral, and Decker would be credited with 7 yards rushing. The Gif below shows the play in question...

Here are some snips of the play. Looks like Manning releases the ball a shade past the 49 yard line 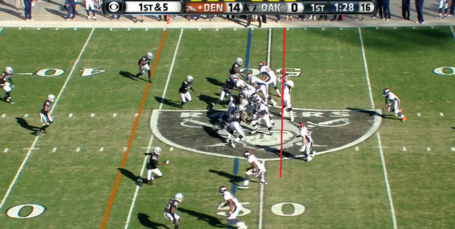 And it appears as if Decker catches the ball a shade behind the Bronco 48 yard line which would make it a backwards pass by about a yard. 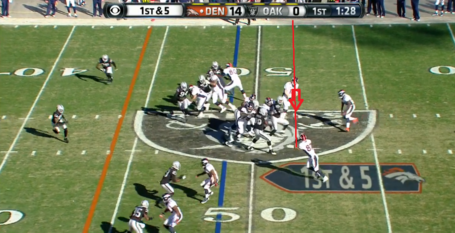 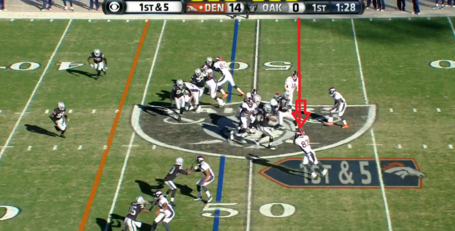 If the NFL does overturn this play, and credits Decker with seven yards rushing, Manning would not hold the single season passing record. He would finish the season with 5,470 yards, not 5,477, and the record is 5,476 yards.

Manning broke the record with a five-yard touchdown pass right before halftime. That was Manning's last play before the half, and with the Broncos having a comfortable lead, and Manning holding the record the team decided to sit Manning for the second half.

Head Coach John Fox was asked Monday if he would have brought Manning back into the game for the second half if he did not get the record. Here's what Coach Fox had to say...

"That’s hard to say. What was very positive was I thought we played one of our better halves of football that put us in a position where we could do different things. Number one, all those things are great—those individual accomplishments, team accomplishments—but not at the risk of putting a player at risk. So I don’t know if I’ve answered your question, I’m just kind of telling you what would go through our minds in that situation."

In recent weeks, Manning has said the touchdown record was more significant to him because it represented the result of an offense scoring points as it tried to win games. After Sundays win over the Raiders, Manning downplayed the records significance. When Manning was asked a question about the yardage record he replied "I don't really have much to say about it, to tell you the truth.".

Elias and the NFL say the "fairest resolution" is for Peyton's passing yards record to stand b/c play was initially ruled as a pass.

Looks like the record will stand. Happy New Years everyone!