Share All sharing options for: Denver Broncos quotes from John Fox and players on the Tennessee Titans

"Well, I'm glad they don't because we've got him. But let me tell you something: Peyton Manning is going to make whatever team he plays for better. We're just really happy that he's here. As far as the Titans, they are 5-7, but they're mathematically in the hunt. It is the fourth quarter. They're in the game. This will be like a playoff game for them, the way they're approaching it. I'm sure [Titans Head Coach] Mike [Munchak] and his team will be very ready. It's going to be up to us to make sure we're ready." 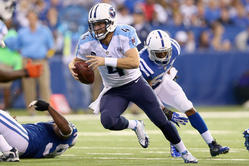 "Yeah. It was a difficult process. You try to narrow it down to a couple teams. It takes some visits [and is] kind of similar [to] when you are getting recruited in college. You can't go everywhere. I really enjoyed the time that I had with the Titans organization [and] really enjoyed spending some time with [Head] Coach [Mike] Munchak. I knew him a little bit. We played them all those years when he was the offensive line coach [in Tennessee] but enjoyed getting to know him. My dad played with Munchak with the [Houston] Oilers and then [I] enjoyed getting to know some of the folks in the organization. Had a couple of nice conversations with [Owner] Mr. [Bud] Adams and got to know some of their offensive coaches. They were first class. I enjoyed the process. Similar to college, like I said, you kind of almost want to go to each team for a little bit. Go play here for a year, go play here for a little bit but you got to make one decision. They were first class in the process and I enjoyed the time and obviously I chose Denver and I've worked every day to try to make it a good choice. I don't think there's ever a perfect decision in those kinds of scenarios but I enjoyed the time with them."

"It's hard to say. I'm really still getting to know them. At this point in the season there are certainly a lot of games to watch and so it takes some time to get to know them and really see kind of who you think they might be. That they have good players. Their front is very stout, disruptive. [They have] fast linebackers and a really good secondary. Top cover guys and [S Bernard] Pollard is a great physical presence. I see a good defense that's what I see."

"I don't think we look at it as a four-game stretch. We have four good teams coming up. All the teams are good in the National Football league. Everybody is tough. I figure if we could stick with what has been working for us-and that has been taking it one week at a time, one play at a time and just biting off what we can chew right now-that's been working for us, and I'm sure if we can stick to that, we'll be alright."

LB Von Miller on the Titans' sense of urgency

"I think that in December, teams always get that playoff push going. Teams always get that sense of urgency. I think the Titans are no different. They have a good team. They lost some close games and if it wasn't for those games it'd be a totally different story. They're a good team-solid across the board. Solid offensive line, solid receiving corps, solid quarterback, solid running backs. It's all across the board. It's going to be another tough one this week."

"We know what our goal is ultimately and to be able to achieve a championship you have to be consistent and I think that's one of the biggest things about this locker room, the character of the guys in here is that we're always striving to get better. We're never slowing down or being OK with what we did. We're always kind of stepping that ladder. These last four games for us are really to fine tune as a team, to play our best football going forward into the playoff and position ourselves to be able to get a home game and set ourselves up to win a championship."