Though not an official award such as the AFC offensive player of the week/month, Manning earned yet another accolade for his 5-TD performance against the Kansas City Chiefs.

After starting off a bit slow Manning finished strong going 22-35 for 403 yards and 5 touchdown passes.  The Broncos reeled off 28 unanswered points to defeat their AFC West rival Kansas City Chiefs taking a strangle hold on the division.

Week 13 marked the 30th time in Manning's career that he has passed for four or more touchdowns in a single game.  He has accomplished that feat 6 times this season.  It was also the 12th time he has thrown for 400+ passing yards in a single game.

Let's take a look at a beautifully placed ball.

The Broncos are in 12 personnel with both TE's to the right, DT split left, Decker to the bottom.  Manning is under center and will run playaction.  Chiefs look to be in a Cover 2 shell over the top, but as the play unfolds it seems as if someone (Berry or a LB) makes a mistake and here's why.  Flowers who is on Decker on the bottom flashes outside leverage.  At the snap he opens into a trail position guarding the outside--as if he has safety help over the top.  The LB's squat in a zone around the 35.  Dreessen takes off and clears this zone which occupies Berry and gives Decker all the position he needs on the deep post to the middle of the field.  In a standard Cover 2, Berry would float more to the outside in order to give his outside corner help on the post or deep cut inside.

Either Flowers doesn't know his protection or the LB screwed up and played zone, or Berry guessed wrong.  Or perhaps it is QQ/H, take your pick.  Regardless, Peyton sees it instantly and unloads the ball 45 yards in the air hitting Decker in stride for the easy TD.  Decker also had a nice pushoff about 20 yards downfield to gain more separation. 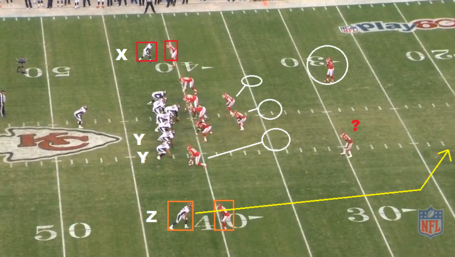 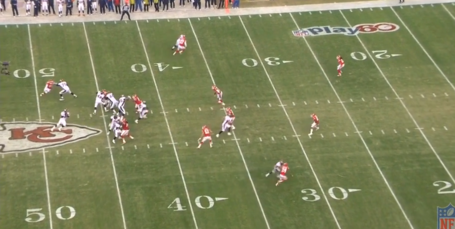 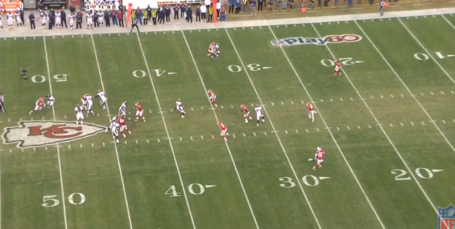 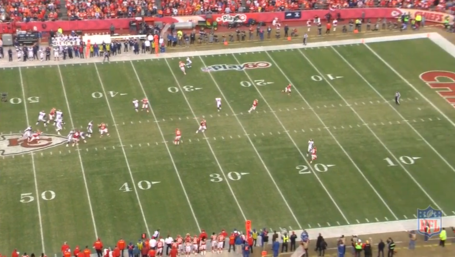 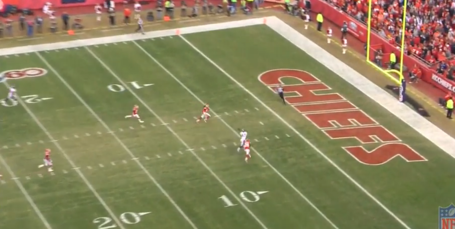 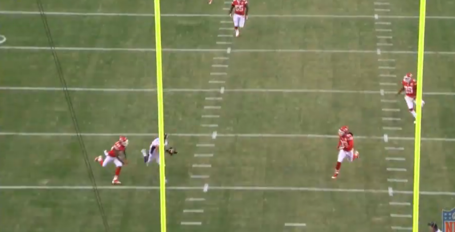