The Broncos fell back 21-10 in the second quarter, but that didn't last long, as Denver trumped the Tennessee Titans 51-28 in Week 14. They set a host of franchise and league records in the process.

Those who say Peyton Manning can't play in the cold need to consider the Broncos quarterback's record-breaking performance Sunday afternoon against the Tennessee Titans.

According to Manning himself, "whoever wrote that narrative can shove that where the sun don't shine." 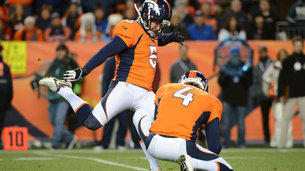 A hard-fought playoff berth was won by the Denver Broncos Sunday with their 51-28 victory over the Tennessee Titans. The Titans, 5-7 entering the game, put up a fight with big plays and a fast start against the Broncos. At one point, they were up 21-10 on the Broncos, as Denver's defense couldn't contain the likes of Justin Hunter and Chris Johnson. Yet two turnovers in the second half proved costly for the Titans, and the Broncos offense proved unstoppable.

Manning threw for 397 yards and four touchdowns, and Broncos running backs Knowshon Moreno and Montee Ball each rushed for touchdowns as the Denver Broncos beat the Titans 51-28 in Week 14 NFL action.

Let's pause and consider the smattering of records the Denver Broncos smashed today.

Next, Matt Prater broken a long-standing and hard-earned NFL record for longest field goal with his 64-yard kick at halftime.

Finally, of course, there's Peyton Manning. The Broncos' MVP continues to destroy franchise passing records, this time with four passing touchdown to four different receivers. His performance brought him to 45 passing touchdowns on the season, only six TDs away from breaking the all-time NFL record with three games to play. It was his ninth game with four touchdowns this season, an NFL record according to one tweet MHR received, while the 508 points the Broncos have scored through the season broke Denver's franchise record according to another.

Broncos have now scored the most points (515) through 13 games in NFL history.

Again, the Broncos have clinched a playoff berth for the third straight season. There are still three weeks to play.