Take a look at this Cornerback prospect that the Broncos interviewed.

The Denver Broncos interviewed two prospects while attending the East-West Shrine game last month. We have looked at Wide Receiver Chad Bumphis. The other young talent the Broncos have their eye on is Kayvon Webster, a Cornerback from South Florida University. 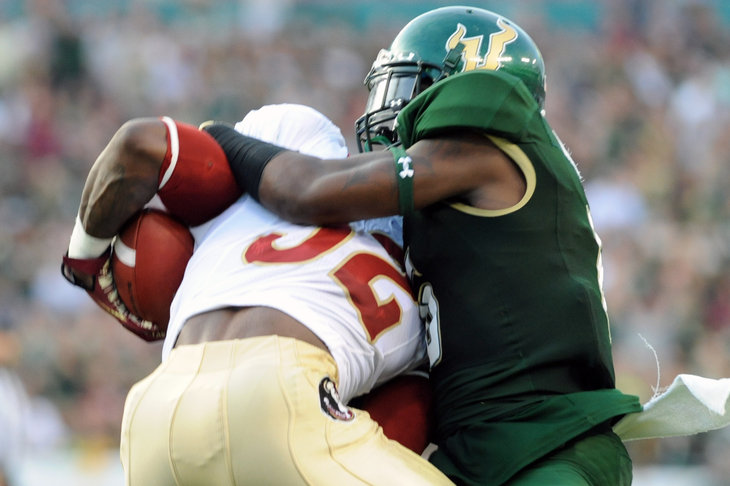 Webster played 49 games at South Florida, starting 32. He amassed 190 Tackles, 8.5 Tackles For Loss and 2 Sacks, while breaking up 18 passes with 3 Interceptions. He also Forced 4 Fumbles and recovered 1, taking it back for a Touchdown. As a Senior, Kayvon finished 11th in the Big East and led the Bulls with 82 tackles in 2012.

2011 saw him start all 11 games on the outside and Webster doubled his production, with 49 Tackles, 7 Pass Breakups, 2 picks, a Forced Fumble and Recovery as well as a TFL.

There isn’t a whole lot out there to work with as far as scouting reports go, so I had to cherry pick through a few articles to find data to relate.

Last season, the University of South Florida's pass defense ranked 88th nationally. It had just two interceptions, tying for worst in the Football Bowl Subdivision. It allowed a completion percentage of 68.4, also worst in the FBS.

But when scouts watch USF games, they are inevitably drawn to Cornerback Kayvon Webster, who managed to shine in a dismal season for the Bulls.

"Those overall numbers don't come into play, unless the guy is being targeted and exposed,'' said Houston Texans scout Mike Martin, a former Vanderbilt defensive back who played at Jesuit High School. "Kayvon held up pretty well. He's an excellent tackler. His abilities and talents come through. He's a good prospect.''

Another snippet from an additional article shines a little light on what the Broncos may see in Kayvon.

Webster has a high regard for Champ Bailey and his press coverage skills. He worked with former USF cornerback and current Dallas Cowboy Mike Jenkins during the summer of 2011.

This sounds like a young man that will give the effort to succeed, because he will come from the underdog role. Nothing will be given, he will have to act like Brian Dawkins and Take It!

The New York Jets and the Houston Texans also met with Kayvon during the East-West Shrine game week.

Webster has already confirmed that he will be attending the NFL Combine and has signed with Carlos Rodriguez and Manny Vadillo of Majestic Agents & Consultants (MAC) as his Agent.

Kayvon Webster appears to be exactly the type of player the Broncos covet. He has the skills and temperament for the position, as well as the intelligence to absorb information and learn. He also possesses the attitude needed to become a #1 Cornerback. His desire to seek out a mentor and determination to succeed are a testament to his character. It is my belief that Kayvon Webster would be another Chris Harris jr. if he is signed by the Broncos as an Undrafted Free Agent.