It is an honor and privilege to share knowledge and information with my MHR brethren in this newest edition of MHR University! If you go look back through the archives, you can find a slew of informational posts by various contributors. This is a personal project I take a lot of pride in because I'm just as much along for the journey as you folks.

Going back as little about a year or so, I didn't know my ass from a hole in the ground when it came to football analysis. I still have a TON to learn---but here's the cool thing. I know firsthand that research, asking questions, and analyzing tape really pays off. Now when I watch football, I know what is going on instead of screaming at the TV "you f@#$ing suck get off the field!!!" Come on, don't act holier than thou---you've done the same thing amirite? Haha regardless my passion for learning about the game has really come a long way and I have MHR to thank.

Here is the goal of these posts:

To understand football in a more complete and meaningful way.

That's it, nothing more, nothing less.

Here are the rules:

1) Ask questions, no question is stupid or a waste of time---If you don't know and want to know, ASK!!!

2) Have an open mind---concepts are concepts. Applying them is something different i.e. we may see things differently on certain plays that I highlight.

These posts are also about encouraging discussion, so if you have experience with what we are discussing---share it! If you're a coach, former player, anything like that, what is your take?

Elvis Dumervil, the shape of our defensive line. Should we sign this guy or that guy, should Wolfe kick inside, can Ayers play Doom's role etc etc. There have been tons of questions about the Broncos defensive line, and to be able to answer them we have to get back to the basics and start with a few terms:

Let us start with the difference between strongside and weakside--take a look at the snip below: 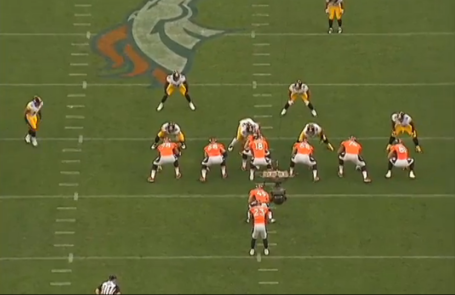 You can see Peyton Manning and the backs lined up in straight "I" formation. You can also see that one side of the Broncos line has an extra body. Take a look again: 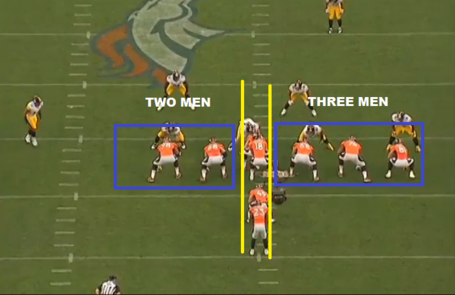 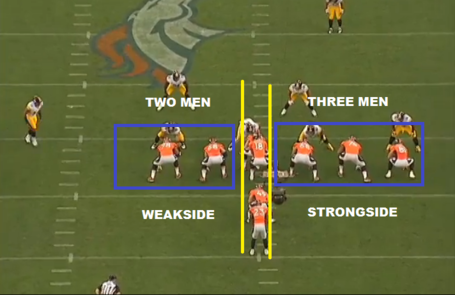 This is important because it tells us a bit more about our defense. We know that Von Miller is the "Sam" LB, and usually rushes from the strongside and that Doom usually plays opposite lining up on the weakside of the formation against the LT. Store this info for future reference.

Now that we have that, let's get into Gaps and Techniques.

A Gap is the space between the offensive players on the line. You start inside and work outside labeling them with letters.

- The Gap between the Center and Guard is called the "A" Gap.

- The Gap between the Guard and Tackle is called the "B" Gap.

- The Gap to the outside of the Tackle is called the "C" Gap. (If you have a TE in the formation lined up off tackle, the space outside of him is the "D" Gap. Here's a visualization:

When you hear Jon Gruden say "they brought a double "A" Gap blitz that time" it means that the defense blitzed the areas between both Guards and the Center.

With technique, technique is merely where the defensive lineman lines up in relation to the opposing blocker. My diagram is a bit more simplistic and crude, so let me include a brief explanation and a more detailed diagram:

Bear Bryant and Bum Phillips have been credited with developing a system of numerical alignments for defensive linemen. Bryant himself credited Phillips with the innovation. Some playbooks deviate slightly from the designations in the diagram above, but the philosophy of the numbering system is the same. In a majority of systems, even numbers denote an alignment that is head-up or helmet-to-helmet on an opposing offensive lineman while odd numbers denote an offset alignment, i.e. over the inside or outside shoulder of an opposing lineman. Letters describe the spaces, or "gaps," to either side of each offensive lineman. The space between the center and guard (to either side) is called the "A" gap, the space between the guard and tackle the "B" gap, and so forth.

The important distinction to note here is that the even numbers are given two separate distinctions. For example, a "2" technique would line up right across man up from the Guard. But a "2i" technique would line up on the inside shoulder of the Guard. These little things matter because a defensive lineman that squares up directly with the opposing blocker is most likely going to "two gap". "Two Gap" just means he has responsibility for both gaps. This responsibility is "read and react". He can't just take off to one side or the other from the snap. He has to guage where the play is going and control his blocker accordingly. Now, if he lines up on either the inside or outside shoulder of that same man, it is more likely that he will "one gap." Again his responsibilities are just that one gap and he can fire off quickly from the get go. Here's a visual for what I'm talking about:

Visually, you can see why this makes sense. If a DT lines up right across from the Guard, he is in better position to control both gaps. If his intent is to "two gap" and he lines up to one side or the other, he's already at a disadvantage. The "one gap" responsibility however has the luxury of lining up on either shoulder. Remember though, these are just little clues that add up. Just because something is "more likely" doesn't necessarily mean that is the way it will be.

These are broad generalizations that have some implications. An undertackle is usually the DT that will rush. This implies he is "one gapping". A nosetackle is a clogger or space eater. His responsibility is to eat up space, clog up gaps and allow the other defenders to be unblocked. The nosetackle more often than not "two gaps". Now those are generalizations and as we will see throughout this series there are exceptions. But know when someone says "UT" they are speaking of the pass rushing DT, and when someone says "NT" they are speaking of the big fat guy that takes up space.

This guy is a one gap pass rusher. Think of Warren Sapp as a Buccaneer. Now we just stated that the UT is a one gap pass rusher, so you could interchange the two terms except that would ignore the other possibilities---so don't automatically assume that 3-Tech and UT are the same thing, AND remember that technique refers to where the player lines up.

I brought the "3" tech up is to explain why he can be so effective. To understand this, let's use what we've learned so far.

- The weakside of the offensive formation has less blockers.

- Usually the strongside will line the TE off RT.

Given those things, you know the following:

- You will usually have less men on the left side of the formation.

If you put your best pass rushing DT as a 3-tech off of LG, you will more than likely end up with a one on one matchup. As we saw all year, Del Rio found ways to isolate the one on one matchups. This specific alignment has a specific term and that is 4-3 "under" front. We will get into "under" and "over" in later articles.

Now, if your head isn't spinning too much, let's test our knowledge using some actual game stills. 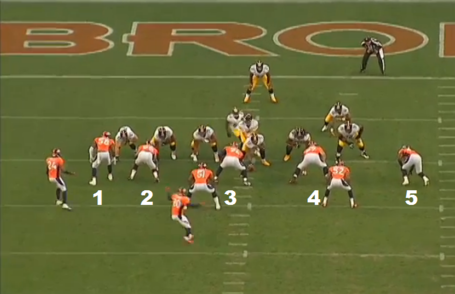 Don't read anything into those numbers, they're just to identify defenders.

1) Von Miller, lined up on the outside shoulder of the TE. That makes him a "9 tech" on this play.

2) Derek Wolfe, lined up on the outside shoulder of the RT. That makes him a "5 tech" on this play.

3) Ty Warren, lined up on the outside shoulder of the C. That makes him a "1 tech" on this play.

4) Justin Bannen, lined up on the outside shoulder of the LG. That makes him a "3 tech" on this play.

5) Elvis Dumervil, lined up on the outside shoulder of the LT. That makes him a "5 tech" on this play.

Remember Technique just tells us where they are lining up. Doesn't necessarily tell us their gap responsibilities (though we can take some educated guesses)

Here's the same play right after the snap: 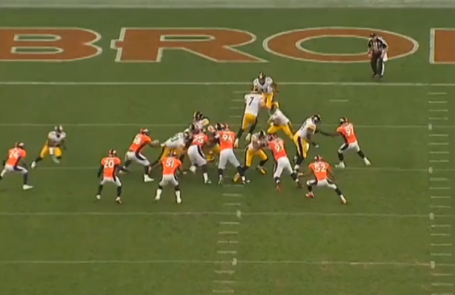 There you have it MHR--I hope you enjoyed this first installment of 2013's MHR University! As any good teacher, I have an assignment for you---very simple. Using the next two stills do exactly what I just did. Using the first, tell me what technique each D-lineman is lined up as and which side of the formation (defensive right/defensive left) is the strongside/weakside, and using the second, tell me what gap responsibilities you see. 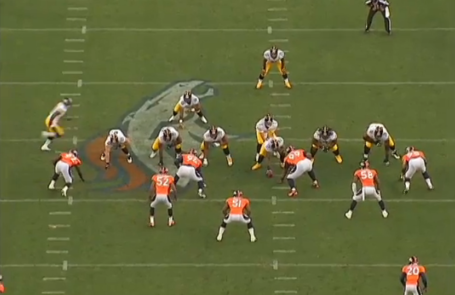 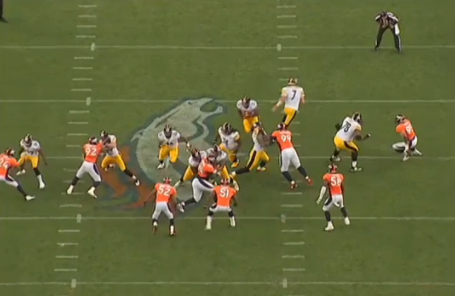 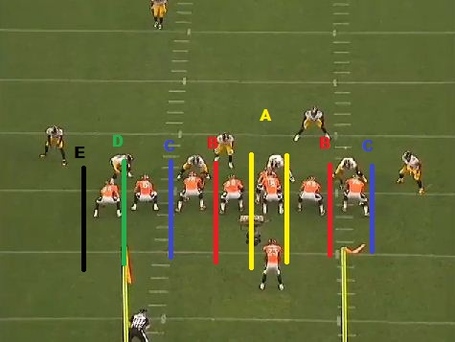 Here the Broncos are lining up with two TE's on the left side. This essentially creates a "D" and "E" gap. If you added one more guy to that side it would add an "F" gap. So yes you can keep going. Notice how the Steelers are lined up. Both DE are lined head up on the tackle which would indicate they are two gapping. Both OLB are playing the 9 tech (even though there is no TE to his side, notice how far the ROLB is lined up off Franklin. The Safety in the box looks to be taking care of the "E" gap.