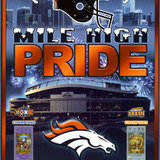 Bio: I have been a Bronco fan since 1969 when my parents moved to Denver. I found MHR in 2008 when I was trying to make sense of the whole McDaniels/Cutler "he said-she said" dispute. I joined the staff about a year later.

Over the last couple of years, I've found a niche at MHR writing about the rich history of the Broncos (and the NFL in general), presenting "primer" level articles about the rules and nuances of the game for fans who are newer to the game of football, writing research-based articles on questions raised by readers, and in running MHR's Staffer vs Reader predictions contest each season. I also on occasion write op-ed articles on things occurring in the life of the Broncos.

Favorite Post: Little Known Broncos Facts - Elway the Punter
I enjoyed doing this article as the starting point for bringing back into the light things that Broncos fans may not be aware of. Perhaps it's because I tend to be someone who enjoys trivia (though my wife would claim it's because I sometimes get trivial. :D )