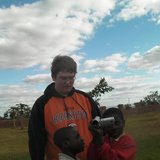 Bio: I’m Troy Hufford. I am a manufacturing engineer living in Florence, Kentucky. Many of you who have frequented MHR for a while know me as KentuckyBronco or KB, for short. I cut my teeth at MHR back in the days of McJayGate and have ridden the orange and blue wave alongside you up to and including today. The way I see it, MHR is still MHR. People can come and go, but the goal of this site is still the same… to interact with other Denver Broncos fans via the wonderment of the internet. I remember back when the best I could do was read the FoxSports power rankings and scroll down to the vitriol of the comment section. Then I found MHR. It was a beacon of light in a Raider fan filled world…

You guys are the reason I’m still here. I don’t do this because I want media prestige. I do this because I love the Broncos and I love to talk with fellow Broncos fans. MHR has allowed me to do that. For that, I am thankful.

My favorite article that I’ve written on MHR is "Why Von Miller Shouldn’t Be the Denver Broncos 2nd Overall Pick". It came the morning of the draft and I really wanted the Broncos to draft Patrick Peterson. This article not only illustrates just how stupid I can be, but also how passionate I am about wanting the best for the Broncos… however misguided it might be. I think it takes a certain level of humility to admit that you’re wrong about something, especially as an engineer who is almost always right. That’s what I present to you, MHR. I am an imperfect human being with a passion for the Denver Broncos. Accept me and I shall accept you.

Consider yourself accepted, Troy. I once said Knowshon Moreno, if and when the Broncos draft him, would revolutionize Denver's running attack. Oops.