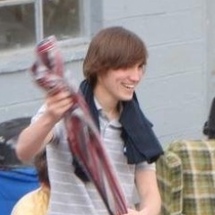 Bio: As a lifelong Bronco fan my I recently moved the motherland, Colorado, and I'm loving every second of it. I'm a big draft nut. You'll find many futile attempts to predict the newest Bronco additions, otherwise known as mock drafts. I'm also a diehard Nuggets fan, so feel free to pick my brain about the Manimal anytime. I make a living as a Software Developer, so in other words I'm a glorified code monkey. I'm always down for some Bronco discussion so never feel hesitant to shoot an email my way.

Favorite Post: I'm going to cheat here and put two pieces. I wrote an article back in 2010, mocking the Broncos second round options. I selected Demaryius Thomas and Tim Tebow. Everyone told me I was crazy, but as it turns out I wasn't crazy enough. Thomas and Tebow went a round higher than anyone would have thought. My other favorite piece is from the 2012 draft where I mocked Derek Wolfe and Brock Osweiler to the Broncos. Everyone again told me I was crazy. I was told I should have selected Devon Still or Jerel Worthy, and that the Broncos would not take a quarterback, let a lone Osweiler. I love those pieces not because I luckily managed to get a couple of picks correct, but it shows how insane you have to think to get even one pick right in a mock draft.

Oh East, ever so humble. Note how he conveniently left off 2011, where he predicted the Broncos would draft Blaine Gabbert #2 overall... I kid, I kid. Welcome aboard East, thrilled you made the trip to MHR with me!